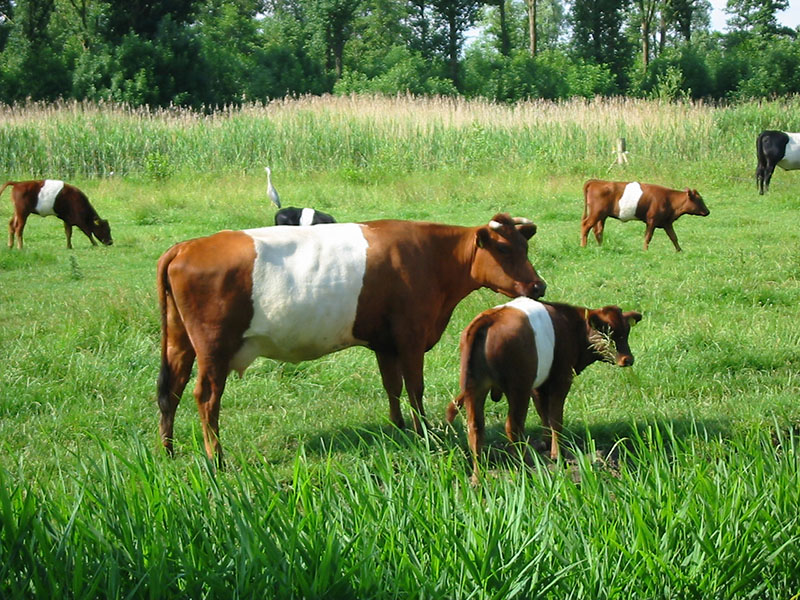 everyone from cultured artists to ordinary farmers have admired them for their peculiar and striking marking. They graced the estates of seventeenth century nobility, and their descendants and other cattle carrying their influence on farms in North America still inspire awe and curiosity among passersby, while many stockmen aspire to own some of these fascinating cattle.

The Dutch Belted breed is, according to records, the only belted breed of cattle tracing back directly to the original belted or "canvassed" cattle which were described in Switzerland and Austria. These "Gurtenvieh" were evidently moved by Dutch nobility from the mountain farms of Canton Appenzell and Tyrol Mountains during or soon after the feudal period. The Dutch were very protective of their belted cattle and would generally not part with them. They were highly prized for their milking and fattening abilities. The breed began to flourish in Holland around 1750. (This historical account is found in Professor Raymond Becker's book, Dairy Cattle Breeds: Origin and Development.)

Bulletin #21 of the Dutch Belted Cattle Association of America published June, 1923, gives this insight into the history of the breed in North America: "it is said that the first importation of Dutch Belted Cattle was by the United States Consul D. H. Haight in 1838; however, the first importation of importance was made by P.T. Barnum, the great showman in 1840. He was able to secure a few animals for show purposes only by agreeing that they were to be used principally for exhibition, as a feature of his great circus. Barnum's herd of cattle were exhibited for several years. Later they were placed on a farm and this seems to be the beginning of the Dutch Belted cattle in America. From that time until 1906 a number were imported, but since 1906 our government has not allowed any importations owing to the prevalence of the foot and mouth disease in Europe."

"In America the Dutch Belted Cattle are recognized as a dairy breed, and we find them in 1908 at the California State Fair, where the cow, Julia Marlow No. 1187, made the most butterfat at each milking for five consecutive days over all breeds. Again in 1909, Lady Fresno No. 1183 won the first prize and Julia Marlow the second prize over all breeds on a five day butterfat test. These performances were the more remarkable because in 1909 there were only 18 Dutch Belted females of milking age in the state of California. Passing on to the year 1914, we find we have the best four cows in milk over all breeds at the Arizona State Fair. In 1920, the champion diary cow of the state of Florida was Ferndell No. 1961." 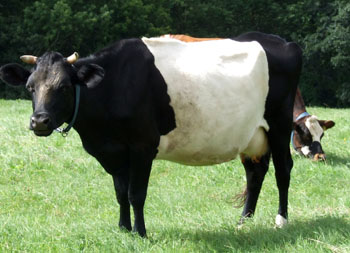 Breeders of Dutch Belted found the cattle profitable as well as beautiful. A prominent Florida physician, Dr. J. G. DuPuis, established a dairy in south Florida (where the climate was considered unsuitable for such) and stocked it with as many Dutch Belted cows as he could find, along with Holsteins and Guernseys. He preferred the Dutch Belted for their ease of management and milk quality. He felt Dutch Belted milk was more easily digestible due to the soft curd and high protein/fat ratio.

The American Livestock Breeds Conservancy now lists Dutch Belted as on the critically rare breeds of livestock in the North America, with fewer than 200 registered cattle in the country. The breed in the U.S. is the only source of pure belted genetics in the world since the Lakenvelders in Holland suffered from much crossbreeding from 1950 to 1976. In fact breeders of Lakenvelders in Holland have turned to American Dutch Belted Breeders several times since then for semen from pure bulls.

The results of Holland's breeding program with Lakenvelders in the last 40 years is a demonstration of the effects of crossbreeding on breed consistency. In 1976, after two and a half decades of cross breeding the original Lakenvelders, the remaining cattle of those herds were only 2% well-marked. Since reintroduction of pure bloodlines via semen from the U.S. in 1990, the national Lakenvelder herd is 57% well-marked. Among pure Dutch Belted cattle in the U.S., roughly 98% are wellmarked, and pure Dutch Belted bulls produce up to 90% well-marked calves on cows of other breeds showing the prepotency of the belted gene in pure individuals.

Dutch Belted have other unique characteristics which make them desirable in crossbreeding programs. Of course, due to the rarity of the pure Dutch Belted crossbreeding can only be recommended by use of Dutch Belted males or semen on common cows, not crossbreeding Dutch Belted females to males of other breeds. Such crossing has been to some extent responsible for the decline in numbers of pure Dutch Belted. Dutch Belted are small-boned, making them very easy calving. They have unusual longevity and fertility, high meat yield and friendly dispositions. Dutch Belted Al sires are attracting interest among grass based stockmen and dairymen because of these features.