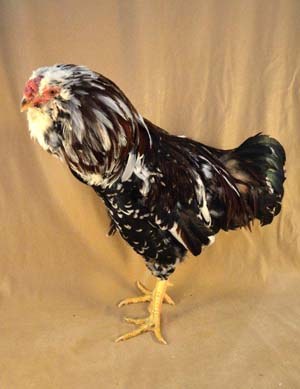 The only Russian breed of chicken found in America, the Russian Orloff originated from Count Orloff, aka Alexey Grigoryevich Orlov (1737-1808). Count Orloff imported them from Persia, and before that is only speculation. There are rumors that the Bruge, Thuringian, and Ushanki breeds are the basis of the Russian Orloff.

The Russian Orloff didn't make its way to England and Western Europe until 1899, but arrived in America sometime before that, because it was admitted to the APA in 1875. It wasn't to last, though, because it was removed in 1894 due to a lack of popularity.

The Russian Orloff is a tall chicken, with thick feathers around the neck, yellow legs, small wattles, cushion combs, and a very strong constitution. This breed tolerates harsh and cold weather, and has a high survivability in extreme conditions.

Males typically weigh 8.5 lbs, females 6.5 lbs. They have a calm temperament. And they've been considered a meat breed, but the flesh is rather hard.

They are indifferent layers, and not very broody, producing light brown eggs.