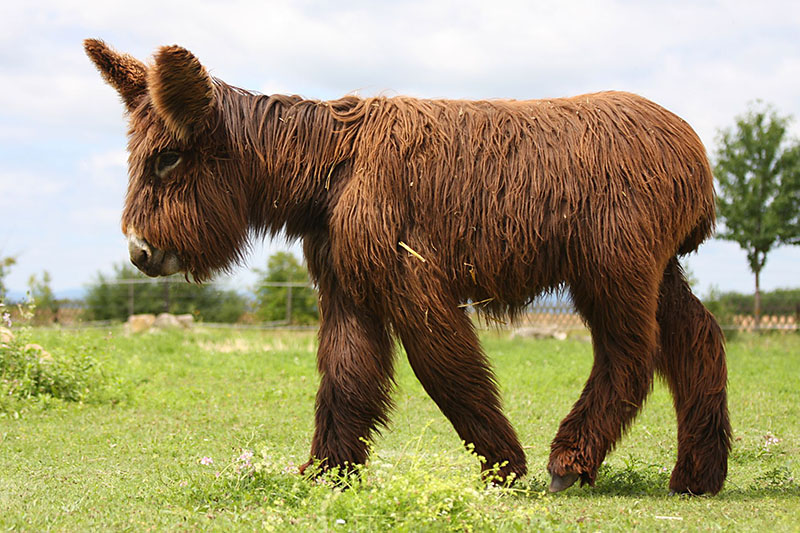 The origins of the Poitou, as with many ancient breeds, is a bit vague. It is said that the donkey and the practice of mule breeding was introduced to the Poitou region of France by the Romans. The two breeds, Poitou (donkey) and Mulassier (horse) seemed to have been developed side by side for the sole purpose of producing mules of exceptional quality. It is not known when the people of Poitou began selecting for the type of mule-sire which we know today as the Poitou, but evidence shows that the breed was already well established 1717 when a memoirs of the king's adviser described the donkeys of Poitou thus: "There is found, in northern Poitou, donkeys which are as tall as large mules. They are almost completely covered in hair a half-foot long with legs and joints as large as those of a carriage horse."

Up until the years following World War II, the Poitou played an important role in supplying quality mules to France and the rest of Europe. It is said that the mule resulting from the union of a Poitou and a Mulassiere is the finest working mule in the world. Whether this is indisputably true, we can not say, but a Poitou mule, more often than not, fetches a higher price than any other. It has been estimated that in the heyday of the industry, the Poitou region produced as many as 30,000 mules per year. 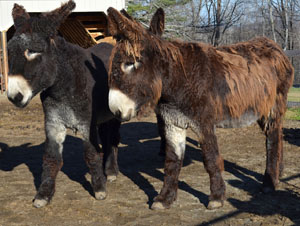 After the war, mule production began to drop off. Tractors and automobiles were replacing draft animals in every profession. Without a reason to produce mules, there was little reason to raise Poitous. The decline of the breed was swift. By 1977, only 44 donkeys of any age could be counted, held by a few dedicated breeders. Fortunately, the cry was raised and efforts to save the breed began. To day, there are perhaps as many as 180 purebred Poitou Donkeys, but that number is still far from safety.

The Poitou is noted for its large size. The Andalucian ass is the only other European breed of comparable size. Early breeders of these animals selected for large ears, head and leg joints. The belief was that jacks with these features would result in exceptionally large and strong mules. As a result, the ears of some individuals of the Poitou are so large that they are carried horizontal. 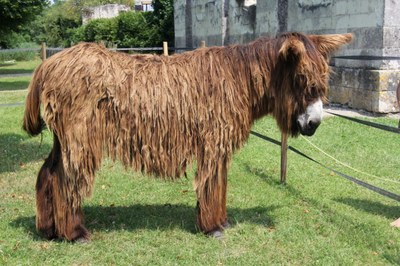 By standard, a Poitou should stand between 1.35 m and 1.50 m at the withers. His coat is black or brown with a grey underbelly and a white nose and eye rings. A Poitou must never have a cross upon his shoulder and back. The head is quite large and long, set on a strong neck. The withers are unobtrusive and the back flat and long. The croup is short and the haunches round. The limbs are strong with large joints and loose moment. The feet of a Poitou are larger than those of other donkey breeds and covered with the long hair of the legs. The ears should be large and open and open, again, covered in long hair. The actual coat of a Poitou Donkey is longer and softer than that of other donkey breeds. When the animal is left ungroomed, it will often retain the long hair of its youth which becomes matted and tangled, growing down into a great coat. Tradition dictated that these animals with their great "cadenettes" were most highly valued.

Changing attitudes in husbandry and hygiene finds many donkeys being allowed to shed their great coats, but one can still find a few Poitous "bourailloux" (with coats of great length).