Brafords, like most recognized breeds today, were born of necessity - the necessity to consistently and efficiently produce a uniform product in specific production environments. Working with a base of Brahman cows that were primarily Partin and Hudgins breeding, Alto Adams Jr. began using Hereford bulls on his St. Lucie County, Florida ranch in 1947. The resulting steer and heifer calves were outstanding, but the Hereford bulls required to produce those calves had extreme problems with feet, eyes and general livability. Adams quickly realized that using Hereford bulls that were not adapted to South Florida was simply not feasible and he began experimenting with various types of Brahman-Hereford cross bulls. 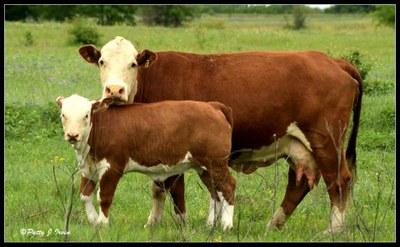 Eventually he identified Braford bulls that were producing calves that met his needs and he used these bulls and their offspring to form what is recognized as the Foundation Herd of the Braford breed in the United States. Brafords are known for superior maternal ability. Early puberty, fertility, calving ease, optimum milk production, maternal aptitude and productive longevity have earned Brafords this distinguished reputation. Braford cattle are approximately 3/8 Brahman and 5/8 Hereford.