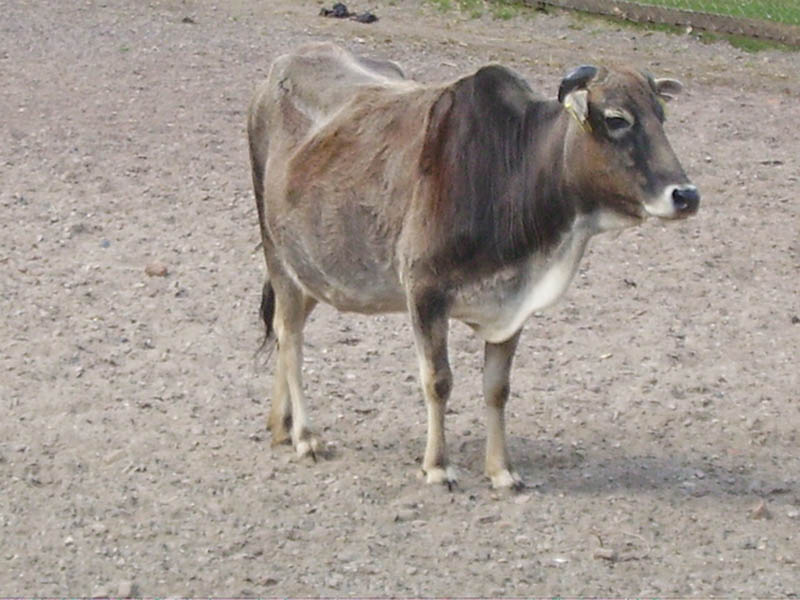 The Miniature Zebu, or Nadudana, is of the Bos indicus species. The name "Nadudana" is a Hindi word for "small cattle", as the breed was originally discovered in southern India. Due to this tropical origin, the Miniature Zebu handles high temperatures well. These cattle are said to be historically kept and bred on temple grounds, because of their small stature.

This is a very rare breed, and critically endangered. Because of this rarity, they are often sought out as zoo animals: some were imported to the USA's zoological gardens in 1920s, nineteen were imported into Australia in 1995, and four went into New Zealand in 2009.

Their most notable characteristic is their small size; Miniature Zebus have a height range of 90 cm to 107 cm. Mature cows weigh 300 to 500 lbs, and mature bulls weigh 400 to 600 lbs. This makes them ideal for junior rodeos, FFA, and 4H activities, as they are easier for children to handle. Where some breeds might be bred to be smaller with each passing generation, or mutated into their size, the Miniature Zebu's small frame is naturally occurring.

They also have a large hump on their shoulders that increases in size with age, and a sizeable dewlap. Predominantly, they are colored gray, but can also be black, red, spotted, or white. In bulls, the neck, shoulders, and hump may also be black.

These animals are slow to mature, but have very long lifespans, an average of 18 to 21 years. They are also said to have a high resistance to disease, ticks, and bloat. They are also resistant to flies, due to active sub-dermal twitches.

Miniature Zebus have many uses: they can be used as draft animals, or kept for their meat, milk or hides in parts of the world. If kept for meat purposes, they have yields of approximately 60% lean meat. As a dairy producer, they produce a gallon of milk that is high in butterfat.