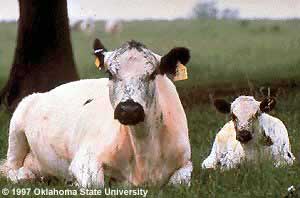 The American White Park is a large white breed with black or red points (ears, nose and eyes). Cows average 1000 pounds and bulls between 1700-1800 pounds. The cattle are predominately polled with 3 to 5% horned. They are docile and the cows milk well. 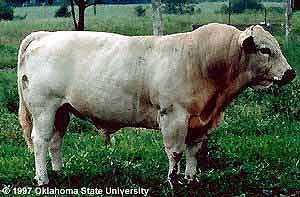 Today, American White Parks are promoted and selected as a beef breed. The breed's origin, however, is not clear. Some think it is largely descended from the British White, a hornless, dual purpose breed from the eastern countries of England. Others feel that the American White Park is primarily Angus in origin with some White Park breeding introduced from the breeding pairs of White Park brought in during World War II to Canada. According to this theory the offspring of the original importation were sent to the Bronx Zoo, from there they were split into two groups. One was sent to the King Ranch in Texas and formed the nucleus herd of the White Park in the United States. The second groups was sent to Washington and played a part in the formation of the American White Park.

The breed association was formed in 1975. It maintained an open herd book policy for six months during which time 300-400 animals of varying documentation but the correct appearance were included. Since that time a number of purebred British White bulls have been imported into the U.S. and introduced into American bloodlines.

The American White Park is comparable in size to the Hereford, Angus, and Shorthorn cattle.