The Krishna Valley breed of cattle is 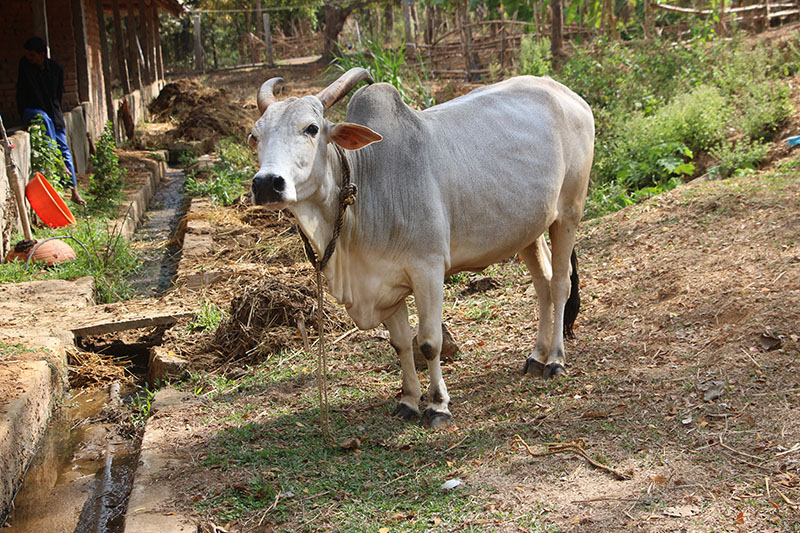 used exclusively in the black cotton soil of the watershed of the River Krishna and other adjacent rivers such as Ghatprabha and Malprabha in the southern portions of Bombay State and Krishna Valley tract of Hyderabad State of India.

The breed is of recent origin. It is claimed that during the last two decades of the nineteenth century some of the Rajas of the Southern Mahratta country which lies in the watershed of these rivers tried to evolve a powerful bullock for agriculture purposes in the sticky black cotton soil. It is claimed that Gir cattle from Kathiawar, Ongole cattle from Madras, possibly Kankrej from Gujarat, and local cattle having Mysore-type blood in them were used to evolve the Krishna Valley breed. Maharaja Sangli, at one time a well-known breeder of Krishna Valley cattle, contributed substantially in making judicious use of all these strains to produce the desired type of animal which eventually were used for breeding on a wide scale even before the characteristics were fixed to any extent, there is wide variation in the characteristic of the breed. Massiveness in size was the chief dominating factor which attracted the attention of the cultivators. The breed is found in the districts of Satara, Belgaum, Dharwar and parts of Bijapur of Bombay State and also in the native States of Miraj, Sangli, Kolhapur and Jamkhindi which are now part of Bombay State also. They are also bred in the southwestern part of Hyderabad State.

As the breed is an admixture of at least three distinct types, Gir from Kathiawar, Ongole from Madras State and local beasts with blood of the Mysore basic type, it shows a variety of characteristics which is in its short history of formation have not become well fixed. However, certain characteristics were emphasized by the original breeders and had a greater chance of perpetuation. 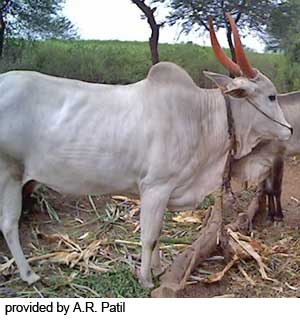 The animal is large, having a massive from with deep broad chest, but is loosely built.

The color most sought after is gray-white with a darker shade on the forequarters and hindquarters in the males. Adult females look more white. Brown and white, black and white and mottled colors are often met with. The forehead has a distinct bulge surmounted by small curved horns which usually emerge in an outward direction from the outer angles of the poll and curve slightly upwards and inwards but which vary a great deal in size and shape. The neck is short and thick and the dewlap is well-developed and pendulous. The sheath is also slightly pendulous. The ears are small and pointed and breeders prefer them not the droop too much.

The body is short but the barrel is large and well-developed. Legs are short and thick and look powerful. Hooves are said to be soft. 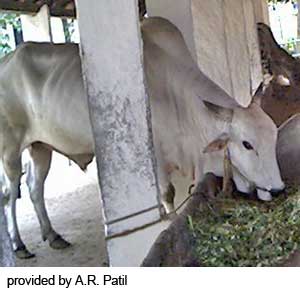 The Krishna Valley is a heavy draft breed suitable for cultivation purposes in the black cotton soil area which becomes extremely difficult to work during the rainy season, and for hauling heavy loads. on account of contributions form Gir and Ongole it has also potentialities of milk production. However, the milk-producing capacity is extremely variable in the breed.

Due to the softness of the hooves and the heavy weight of the animals they are not generally appreciated by the cultivators in areas other than the native home of the breed. However, their large size and heavy weight attracted the attention of breeders from Brazil and the United States of America but, though animals of this breed were exported to these countries, they did not retain their identity.