The history of Limousin cattle may very 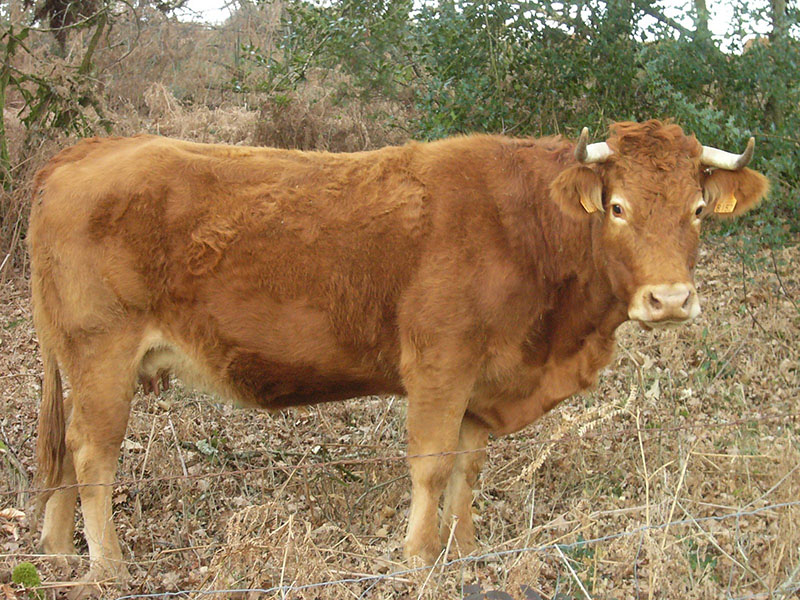 well be as old as the European continent itself. Cattle found in cave drawings estimated to be 20,000 years old in the Lascaux Cave near Montignac, France, have a striking resemblance to today's Limousin.

These golden-red cattle are native to the south central part of France in the regions of Limousin and Marche. The terrain of the homeland has been described as rugged and rolling with rocky soil and a harsh climate. Consequently, the growing of field crops was very difficult at best and emphasis was placed on animal agriculture. Limousin cattle, as a result of their environment, evolved into a breed of unusual sturdiness, health and adaptability. This lack of natural resources also enabled the region to remain relatively isolated and the farmers free to develop their cattle with little outside genetic interference.

During these early times of animal power, Limousin gained a well-earned reputation as work animals in addition to their beef qualities. Rene Lafarge reported in 1698, "Limousin oxen were universally renown and esteemed both as beasts of burden and beef cattle." At the end of their work life, these animals were then fattened for slaughter.

Traditionally, French cattle were kept in a confinement or semi-confinement situation. However, Limousin cattle spent the majority of their time outdoors in the harsh climate of the region. This was a source of great pride to the breeders. The cows calved year round, outdoors, to bring in a regular source of income and the heifers were bred to calve at three years of age. In the winter, the entire herd was outside and whatever the season, the cattle were handled on a daily basis.

Once in the 1700s and again in the mid-1800s, an attempt was made by a small number of French Limousin breeders to crossbreed their cattle in hopes of gaining both size and scale. In 1840, several breeders crossbred their Limousin with oxen of Agenaise variety.

The resulting animals were taller, having more volume of muscling in their hindquarter. Unfortunately, these crossbred cattle proved not to be economical as they needed a larger amount of feed than could be provided in the majority of the region. Only near Limoges, where manure and fertilizers were plentiful and growing field crops was widespread, did these cattle prosper.

Limousin breeders admitted their mistake and then concentrated upon improving the breed through natural selection. A leader in the natural selection movement was Charles de Leobary and his herdsman, Royer. Through a very tough, selective process, these two developed an outstanding herd of "purebred" Limousin. From 1854 to 1896 the de Leobary herd won a total of 265 ribbons at the prestigious Bordeaux Competition, one of France's finest cattle shows.

Limousin cattle made a deep impression in French cattle shows during the 1850s. The first show wins were at the Bordeaux Fair where Limousin tooksecond and third places. The cattle belonged to the already mentioned de Leobary herd. Furthermore, in 1857, '58 and '59, Limousin animals topped other breeds in some of the first carcass competitions at the farm produce competition held at Poissy, near Paris. The reputation of Limousin as meat animals was firmly established. Today, Limousin cattle are still referred to as the "butcher's animal" in France.

The widespread use of natural selection made it important to record the bloodlines of the outstanding Limousin bulls and females. So, in November of 1886, the first Limousin Herd Book was established. Louis Michel presided over the herd book, the objective of which was to ensure the uniformity of the breed. Michel and his 11 fellow herd book commissioners were extremely rigid in the selections. Between 1887 and 1890, the commission met six times and out of 1,800 animals presented for registration from 150 different farms, only a total of 674 (117 males and 497 females) were accepted for registration.

The formation of the herd book had other important consequences. Once established, the French government then established shows solely for Limousin cattle. As with their counterparts today, these shows provided tremendous exposure for the breed as the many valuable traits of these beef cattle were presented for all to see.

By July of 1914, the total number of animals registered in the herd book was 5,416. It is interesting to note the herd book has been reorganized twice since it was founded, once in 1923 and again in 1937. Both times these reorganizations were used to redefine the characteristics of the breed, making the breeders more selective, this improving the quality of the animals.

Through the late 1800s and early 1900s, Limousin breeders paid close attention to morphological characteristics as the breed developed. The medium size of these cattle as compared to other European breeds was, and is still, an outstanding breed trait. They also selected for the dark golden-red hide with wheat colored underpinnings. French records also show a great deal of emphasis was stressed upon deep chest, a strong top-line, well-placed tailhead and strongly-muscled hindquarter. The end result was an efficient, hardy, adaptable animal that was extremely well-suited for its only intended purpose - to produce meat.

As the breed developed in France, cattlemen in North America were looking to Europe to improve their native beef cattle here in the United States. In the late 1800s, English breeds such as the Hereford, Shorthorn and Angus were imported and crossed on native cattle, most of them of Spanish background. In the early 1900s Charolais were imported into Cuba and Mexico and were first introduced into the United States in the early 1930s.

The acceptance of Charolais, combined with the use of crossbreeding as a tool to increase beef production, lead to the investigation of many other Europeanbreeds, including Limousin, by North American cattlemen. One of the first exposures in this country concerning Limousin cattle was in the early 1960s in an issue of the Western Livestock Journal when a Canadian wrote of his impressions after returning from a trip to France. As more cattlemen traveled toEurope, they came back talking about an impressive "new" beef breed they had seen...Limousin.

Cattle from France were not eligible for importation into the United States, as France was a hoof-and-mouth disease affected area. However, the Canadian government did agree to accept French cattle after they had successfully completed a strict three-step quarantine program. Before the cattle left France they were held in a three-month quarantine, then once arriving in Canada they were kept on Grosse Isle of the cost of Nova Scotia or St. Pierre Island in the Gulf of St. Lawrence for another three-month period. Finally, the cattle were required to successfully pass a 30-day "on the farm" quarantine. Once they passed the quarantine, semen could be shipped throughout North America.

The first Limousin imported to Canada was Prince Pompadour, a son of Baron bred at the highly-respected Pompadour Estate of France. Through the efforts of Adrien de Moustier of France (later to found Bov Import, Inc.) and others, the bull arrived in November of 1968. An impressive bull, Prince Pompadour had been selected by noted French breeder Emil Chastanet as a herd bull for his operation. After his arrival, Prince Pompadour was brought to the United States to be part of Limousin exhibitions at various cattle shows and did much to draw attention to the breed.

The first Limousin bulls imported permanently into the United States did not arrive until the fall of 1971. Until this time, the Canadian government had not permitted any Limousin bulls to leave the country except for short periods for exhibition purposes, and then only if the owners posted a large bond that was refunded when the animal returned to Canada. The first U.S. import, Kansas Colonel, was born and raised in Canada and was imported by Bob Haag of Topeka, Kansas, for a group of Kansas Limousin breeders.

The first Limousin semen was available from Prince Pompadour in July of 1969. After being evaluation by J.J. "Bud" Prosser at the International Beef Breeders facility near Denver, semen was picked up by Colonel E.J. Geeson of Agate, Colorado. A retired Air Force officer, Geeson used the semen on his Angus cows on his ranch east of Denver.

After the importation of Prince Pompadour to Canada, another group of Limousin bulls followed in 1969. This shipment contained Decor, Diplomate, Dandy, Prairie Danseur and Prairie Pride. These bulls were the base upon which the breed began its long climb up, finding good acceptance on the part of cattlemen.

As the first Limousin cattle arrived in North America, cattlemen interested in the breed realized the need for an organization to promote and develop the breed in the United States and Canada. At one of these meetings in the spring of 1968 at the Albany Hotel in Denver, fifteen cattlemen formed the North American Limousin Foundation (NALF).

First president of NALF was Bob Purdy of Buffalo, Wyoming. A well-respected cattleman, Purdy was a strong advocate of performance testing. Through his experience with Charolais, Purdy knew many of the pitfalls to be avoided in the early days. Purdy was a capable administrator who gave solid leadership to the Foundation during its infancy in the three years he served as president.

The man responsible for the actual day-to-day running of NALF was the first executive vice president, Dick Goff of Denver. A journalist by profession, Goff's advertising agency had worked for the Charolais association, and had seen first-hand the development of a new breed association. He knew the first three to five years of a breed association's existence were extremely critical and financial stability was the key to survival.

As a result, Goff was largely responsible for the firm financial base upon which NALF was built. He developed the idea to sell 100 founder memberships in the NALF for $2,500 apiece. Each founder member was entitled to a prorated share of Prince Pompadour semen, all of which was owned by NALF. All but one of the memberships was sold and the combination of excellent cattle, leadership and financial stability gave the Limousin breed a tremendous start in North America.

From the initial concentrations in Oklahoma, Texas, South Dakota and western Canada, the Limousin breed has expanded across North America. The tremendous carcass traits of the breed have attracted the full attention of the entire beef industry. In addition to solid prices for breeding stock, feeders are paying a premium for percentage Limousin because of their excellent feed efficiency and packers are asking for Limousin by name.

NALF has grown from the original 99 founder members to nearly 12,000 active lifetime members who have registered over 1 million head of Limousin cattle.

In 2002, NALF realized the need to provide cattlemen with the option of flexibility in their crossbreeding programs. Recognizing the breed complimentarity of Limousin and Angus, NALF introduced Lim-Flex, a pedigreed Limousin-Angus hybrid. Producers now have genetic options to fit every scenario, from fullblood or purebred Limousin for a "full-shot" of muscle and efficiency, to Lim-Flex hybrids for a "blended-shot" of Limousin with added marbling and maternal from Angus (black or red). With Lim-Flex, breeders can offer a "just-right" shot of Limousin to meet the needs of most any crossbreeding program.

Lim-Flex stands for Limousin with muscle and efficiency, along with flexibility - the most significant strength of this powerful genetic blend:

NALF's UltraMate Xbreeding System outlines how to use registered Limousin and Lim-Flex seedstock on different types of commercial cows to hit end-product and maternal targets. This breeder's guide to Lim-Flex focuses on how to record necessary pedigree and breed composition data required for registry, as well as other policies for Lim-Flex animals.

From humble beginnings in France many centuries ago, these golden-red beef cattle have now achieved acceptance here in the United States as a major contributor to a more efficient beef industry.

Limousin is the most progressive continental breed registry in the United States. Limousin is the leader in Muscle Growth Efficiency and is the ideal complement to British-based cows.

The Limousin Cattle and Meat Group

Limousin Cattle GalleryTake a closer look at the Limousin breed.