The Murray Grey originated in southern

New South Wales, Australia. The preferred color is silver-gray although there are numerous variations in the shading of gray. In 1905, on the Thologolong property of Peter Sutherland, a particular roan Shorthorn cow, when bred to various Aberdeen Angus bulls, dropped only grey calves, 12 of them by 1917. Because Mrs. Eva Sutherland liked these grey calves, her husband didn't slaughter them although he feared they would reflect poorly on his black Angus herd. When her husband died in 1929, Mrs. Sutherland sold the herd of Greys to her cousin Helen Sutherland who started a systematic breeding with 8 cows and 4 bulls.

In the early 1940's Mervyn Gadd started a second Murray Grey herd as a commercial venture, using a grey bull from the Sutherlands and breeding up from Angus cows. Gadd was convinced that the Greys were better and more efficient weight gainers, but is wasn't until 1957 that a demand for them developed. Butchers paid a premium price for the Greys because of their consistent high cutability and less wastage. Breeder after breeder turned to them and in 1962 fifty breeders banded together to form the Murray Grey Beef Cattle Society of Australia. The name of the breed comes from the color and the site of origin along the Murray River that divides New South Wales and Victoria.

The Murray Greys began to win carcass competitions in the early 1970's and have continued to dominate the steer and carcass classes at the Royal Shows in Australia. Murray Greys are one of the two breeds preferred by the Japanese for importation, due to their easy fleshing and high-quality meat production.

Introduction to the United States 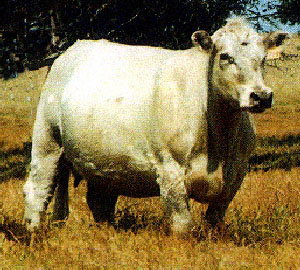 Murray Greys - A Sensible Breed for Profitable Beef Production, a booklet by the American Murray Grey Association, indicates that twenty-eight purebred bulls and nine purebred heifers were imported from New Zealand or from Australia by way of New Zealand. In the 1976 Yearbook, published by the American Murray Grey Association, eighty-three bulls in the United States were listed as foundation sires and their semen was available fordistribution, and twenty females were listed as purebred females.

Traits of the Breed 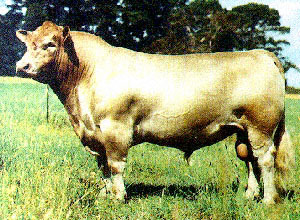 The calves of the breed are small at birth. The cows are good mothers and milk well, and the calves have good rates of growth. Docility seems to be agenuine asset of the breed both in the herd and in the feedlot. The cattle have relatively small heads and bone and are polled. Their survival and reproductive rate has been very satisfactory under a wide range of climatic and management conditions.The color of the Murray Grey can be both an asset and a liability. The gray is a very practical color that reflects more heat than dark colors. The skin should be heavily pigmented or dark-colored and this helps keep away certain eye and skin problems, such as eye cancer and sunburned udders. Unfortunately, the inheritance of the color pattern is not well understood from a genetic standpoint. Studying the data available indicates that, in addition to the basic color pattern genes involved, diluting or modifying genes also seem to play a definite role. Multiple gene effects always make it more difficult to get a true breeding condition.