The Danish Landrace is a medium to large breed that has a distinct physical appearance. They have passed most of their characteristics to other breeds where they have contributed a major portion of the foundation stock. They are white in color, have a rather fine hair coat, long snouts and heavy drooping ears. They have long bodies, deep smooth sides and a noticeable lack of excess fat and wrinkles. They truly appear to be a breed developed very systematically and carefully to produce some of the world's greatest pork products for exacting home and export markets. 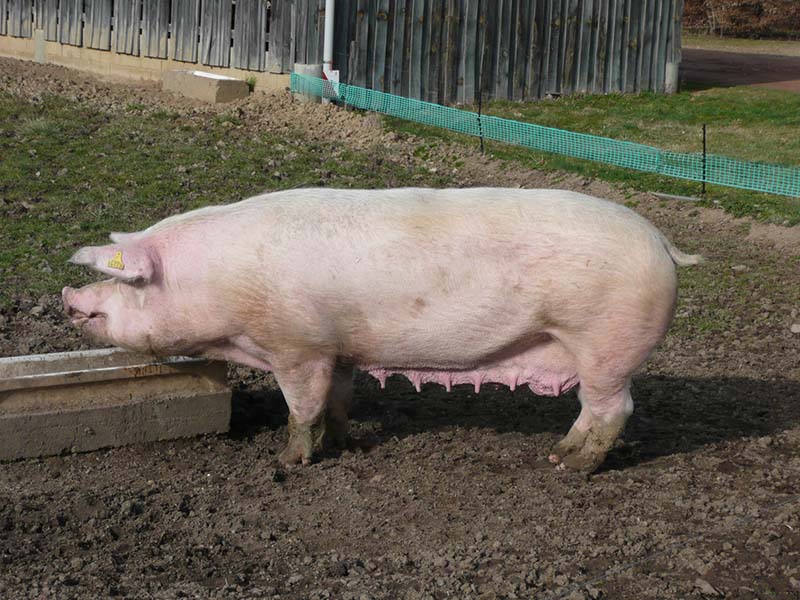 Any swine that had found their way into Denmark prior to 1896 could have contributed to the Landrace. In that year, the first registered Landrace herd was established and breed improvement was commenced in earnest. The first progeny and sibling tests were carried out in 1907, and since then, production and quality testing have become a regular part of the Danish swine improvement program.

The National Committee for Pig Breeding and Production was established in 1931 to improve the swine of Denmark, and the group continues to be active. Nine persons serve on the committee - three members from the Danish Bacon Factories, one member from the Private Bacon Factories, two members from the Association of Danish Farmer's Union, two members from the Danish Smallholder's Association, and the Head of the Department of the National Institute of Animal Science serves as a consulting member. There is little question that the committee has made great and continued progress with the breed since its inception.

While early progress through rigid selection may come rather easily, continuing progress after numerous generations proves more difficult. The proof that progress is still made can be evidenced by comparing data during the seven-year period (1973-74 to 1980-81) at the two test stations where thousands of Danish Landrace pigs are tested. Daily gains increased from 724 to 764 grams daily; feed conversion decreased from 1.4 to 1.3 kilograms; the percent of meat and bone in the loin increased from 73.0 to 76.8 percent, and in the ham, from 79.3 to 81.7 percent; the percent of meat in the carcass increased from 62.2 to 64.7 percent; and the meat quality score appreciably increased. The two tests stations are being combined into one so that the accuracy of test results can be further improved.

The breeding of seed stock for the Danish Landrace in Denmark is carried out on a national scale in herds registered, supervised and approved by the National Committee for Pig Breeding and Production.

Breeding swine in the special herds are chosen annually by neutral district committees. Naturally, there is a great honor in such selections from a herd and breeders are quite careful to protect and enhance their reputations. The Danish Landrace has always been the dominant breed in Denmark, and at times, the only one. A common practice in commercial production in Denmark is to use sows that result from crossing Landrace with the Large White and to breed them with Landrace Boars.

The Danish Landrace is a long and lean breed known for its very high fertility and excellent motherhood. In recent years, great stress has been placed on improving feed conversion and daily gain while also developing a breed strong enough to produce satisfactorily under total confinement systems. The Danish breeders have been successful in meeting these goals. As seen in other countries, where selection is less rigorous and management and nutrition have not been so carefully supervised, the breed displays some weaknesses. The back may be weak, the gait awkward, with the feet and pasterns long and not properly supportive.

The Danish Landrace was developed with definite goals in mind and selection has been both intense and effective. It stands today as a great reservoir of genetic resources for the swine world. Constant selection pressure and intensive testing have probably resulted in it being the truest breeding development of the recognized swine breeds in the world. It has been a source of parental stock for more breeds than any other existing purebred breed.

Registrations of the breed in Denmark are under the control of the Landsudvalget for Svineavl og Production (National Committee for Breeding and Production), Axelborg DK 1609, Copenhagen V, Denmark.