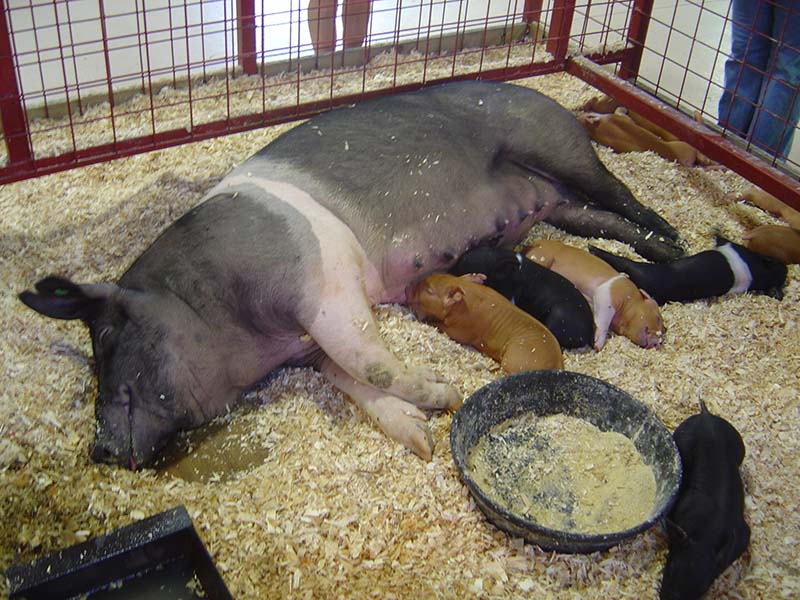 The Hampshire breed of hogs may well be one of the oldest original early American breeds of hogs in existence today. Although there is some doubt as to the exact origin of the Hampshire breed, historical records indicate that Hampshires probably originated from the "Old English Breed." This black hog with a white belt was quite numerous in Scotland and Northumberland and other counties bordering Scotland. They were noted and criticized for their large size, but admired for their prolificacy, hardy vigor, foraging ability and outstanding carcass qualities.

Descendants of these early importations gravitated to Kentucky where the breed had most of its early development. The common name for these hogs was the Thin Rind. 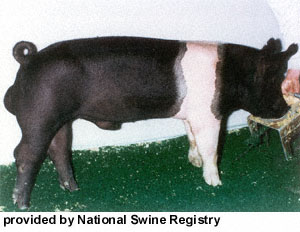 The hogs developed in this area became quite popular because of the hardiness, vigot, prolificacy and foraging characteristics that they possessed. Butchers from Ohio traveled yearly into Kentucky to contract ahead for these belted hogs at a premium price. It is said that in the establishment of the famous Smithfield Ham, only Hampshire hogs were originally used in this product.

These original desirable traits have always been further developed within the Hampshire breed, causing steady growth in popularity and demand.

This belted hog had various other names in those days, including McGee hog, McKay, Saddleback and Ring Middle. Because this hog was locally known by so many different names, the name was changed in 1904 to Hampshire and the record to the American Hampshire Association.

In a ten year period following 1910, the Hampshire breed spread rapidly across the cornbelt.