The Kunekune pig developed into its 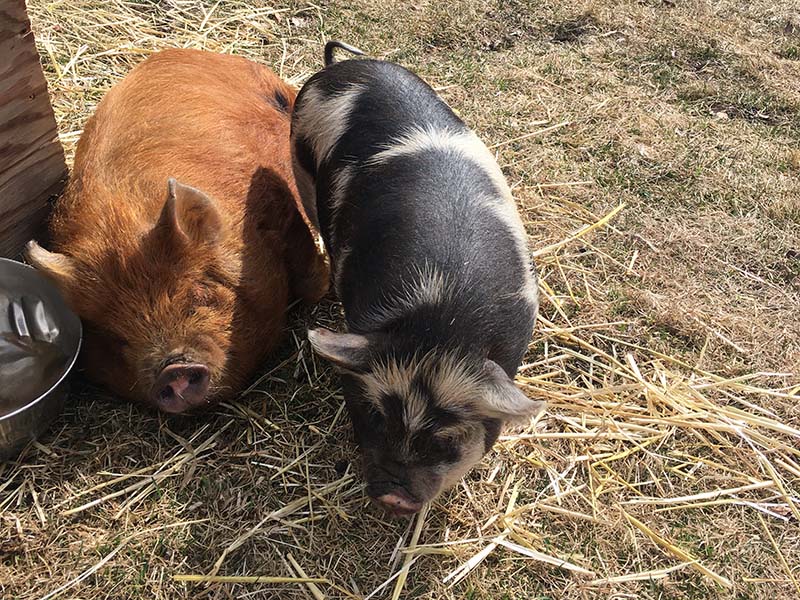 present form in New Zealand, although the breed is of Asian origin as indicated by DNA analysis. During most of the period these pigs have been in New Zealand they were kept almost solely by Maori communities, and were to a large extent unknown by Europeans. It is believed they were introduced very early in the European period, probably by whalers or traders, in the early 1800s. A combined excursion in 1984, by Staglands Wildlife Reserve and Willowbank Wildlife Reserve, led to 18 animals being collected; these animals formed the basis of a captive breeding program. Most of the Kunekune pigs found in New Zealand today are descended from that original 18. They are now widely spread throughout New Zealand, with and active society supporting them; in 2004 it was estimated that there were some 5000 animals in the country, both registered and unregistered. Kunekunes have also been exported to the United Kingdom, the United States, and as far as the European continent. 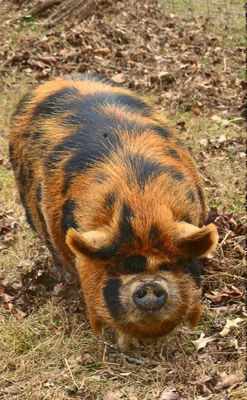 Kunekune pigs are relatively small and highly distinctive, characterized physically by a short-legged, dumpy build, pot tummy, short upturned nose, and a generally fat, roundabout appearance. (The Polynesian work 'kunekune' simply means 'plump'.) A unique feature of the Kunekune are the pire pire (tassels) hanging from their lower jaw (about 4 cm long). But not all purebreds have tassels. Their legs are short ad their bodies are short and round. The color range includes: Black, black and white, white, gold, tan and brown. Temperament-wise they are delightful, being placid, very friendly and easy to maintain. They thrive on human company, and are extremely popular as pets.

The great value of this little pig is that it grazes and fattens on grass alone, needing to be fed only during the winter months in Southland. They like crushed or soaked grain, spuds or anything at all. Household scraps may, in fact, be all that is required in winter. Some Kunekunes root the ground in winter. Kunekunes make excellent lawnmowers for your orchard as they do not harm trees and shrubs. It is not recommended that these little pigs be kept in a sty and fattened on grain as they become too fat and are slower to mature. But they do need a small shed or a drum to shelter them from the wet and cold. Losses from pneumonia will occur if this is not provided. Initially you may put some hay into their shed but they will soon make their own nest. 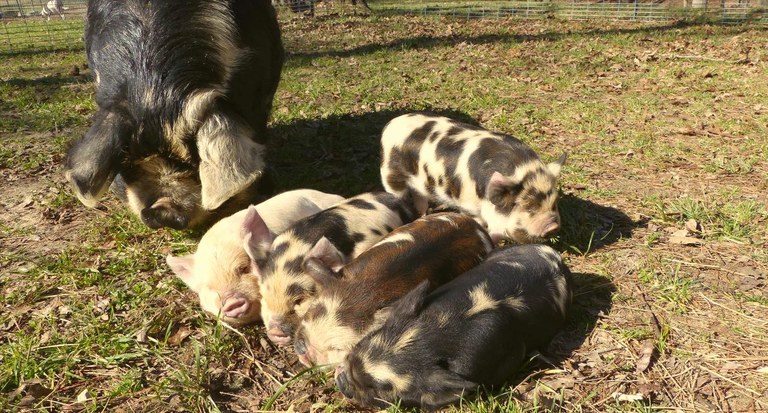 Boars become fertile at 6-7 months. Gilts can get pregnant as early as 5 months but it is recommended that they should not be mated until they are at least one year old giving them time to grow. Infertility is rare but is sometimes caused by boars and sows being too fat. If a male and female are brought up together they may not mate until they have been separated for a couple of weeks and put back together again. Litter numbers vary considerably. The piglets require access to a heat lamp in colder weather for best results. Piglets can be weaned at six weeks and the sow mated again after about a week of weaning her piglets.

Kunekunes have an excellent ratio of meat to fat. The nicest pork is that killed before a year old. Kunekunes are considered by many to be nicer eating than the faster grown commercial pig.