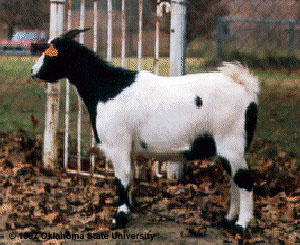 Myotonic goats are also called Wooden Leg goats, "stiff leg" or Tennessee fainting goats. These are one of the few goats that are indigenous to the U.S. There are two strains of this animal. Most of those found in Tennessee and the eastern U.S. are smaller. Most Texas herds tend to be somewhat larger, probably due to selective breeding for the meat market. In fact, some ranchers have renamed them Tennessee Meat Goats.

They also have a market as pets because they are unique. Myotonic means when they are frightened or excited they "lock up" and often fall over (faint) and lie very stiff for a few seconds. It is an over-simplification, but the chemicals which are rushed to humans' muscles and joints to prepare them for "fight or flight" are withheld in the Myotonic under exciting or frightful circumstances.

No one really knows their origin. There are two theories. One of the possibilities is that a private herd sold to a Tennessee farmer around 1880 was the beginning of the breed. A man named John Tinsley arrived in Marshall County, Tennessee, with four goats, a billy and three nannies, which he had brought from Nova Scotia. When he moved on a year later, he left his goats behind. It is believed that all the Fainting goats in the U.S. can trace their origins back to these four.

The other is that there was a spontaneous mutation of a herd in Tennessee about 1885 which resulted in the recessive gene. 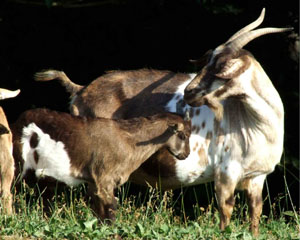 Myotonic goats which have been selected for meat production are heavy rumped, deep chested animals. Most are black and white but multi-colors are not uncommon. They breed seasonally, are easy kidders and have good milk production. Many breeders have noted the breed has the capability to produce two kiddings a year. They are good mothers so in most cases a bonding pen is not needed. Since they are not good climbers and jumpers they are somewhat easier to keep than other goats.

The American Livestock Breed Conservancy has placed this breed of goat on their "rare" list, with an estimated world population of under 10,000. They have now been discovered as excellent crossbreed stock for the Boer goat, a meat goat which was imported from South Africa. The "fainting" gene is recessive, therefore it is usually not expressed in crossbred animals.