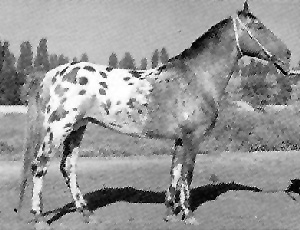 The Karabair is one of the most ancient breeds of Central Asia. Developed in Uzbekistan and northern Tajikistan the breed was established under the influence of southern and steppe breeds. It is well adapted to used under saddle and in harness. It has the typical build of a saddle and harness horse.

The Karabair purebred population recorded in volumes I-IV of the studbook was 1537 stallions and 3871 mares. The Karabair breed is zoned for breeding in all regions of the Uzbek Republic.

In appearance the Karabair resembles the Arabian, Persian, and Turkmenian as well as the steppe breeds. It has a medium-sized clean-cut head with a straight or ram profile, wide jaw, medium-long poll and high set medium-long neck. Some Karabairs may have a shorter heavily muscled neck. It has medium-long, wide and well-muscled loin; regularly sloping and sometimes dropping croup; medium-long shoulders insufficiently sloping; chest well developed in length and width, forequarters more developed than the hindquarters; clean, strong legs with well-defined tendons; correctly-set legs. As a result of insufficient feeding the knee-joints are occasionally underdeveloped and hindlegs may be cow-hocked. The color is bay, chestnut, gray or black.

The measurements (in cm) of the purebreds recorded in volume IV of the studbook are: stallions: height at withers 156, chest girth 175, cannon bone girth 20; mares: 151, 178 and 19 respectively. 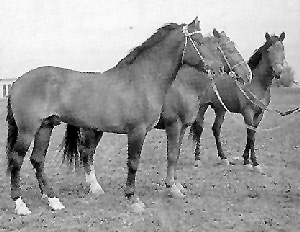 The breed consists of three intro-breed types: basic, heavy and saddle, as well as, 8 sire lines and 5 mare families.

The main studs are the Jizak stud, the horse breeding farm of Gallyaaral state farm and Navoi stud in Jizak region. The Breed is improved through pure breeding.