Of all the horses registered with the 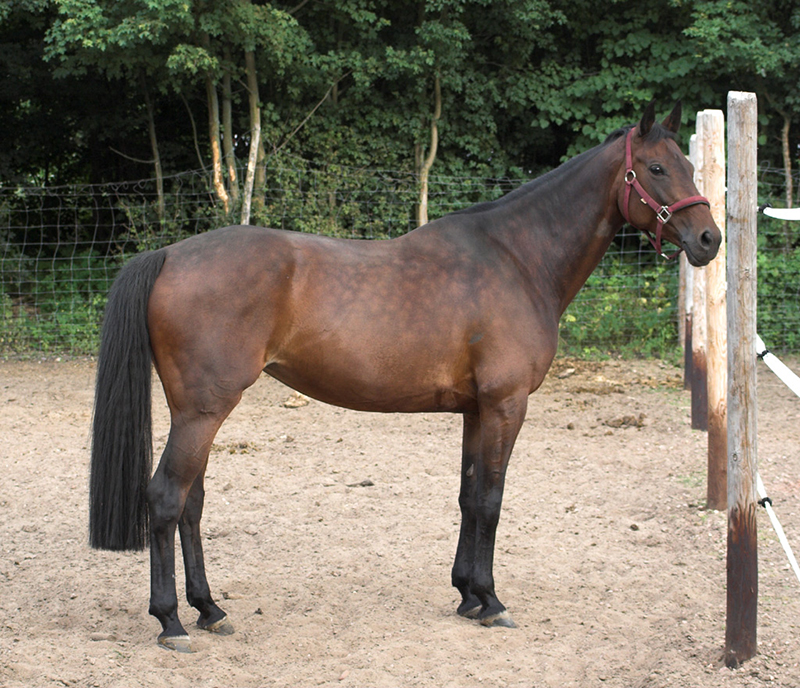 German Equestrian Federation in 1987, approximately 8 percent were Oldenburgs. The Oldenburg registry represents one of the top lines in Germany. The percentages are somewhat skewed as to Oldenburgs, due to the fact that the region in which these horses are bred is a small one and therefore produces fewer absolute quantities of horses than other registries. While representing the smallest breeding area in Germany, Oldenburg is nevertheless one of the most important.

The Oldenburg is bred in a small area near the modern region of Lower Saxony surrounding the city of Oldenburg, a breeding area historically confined to approximately 5,400 square kilometers, in the center of the Hannoverian region. The average breeder is a farmer with from 20 to 100 hectares of land and two to four registered breeding mares. The breed, also found in East Friesland, can be traced back to the 17th Century, with bloodlines based on the Friesian horse. 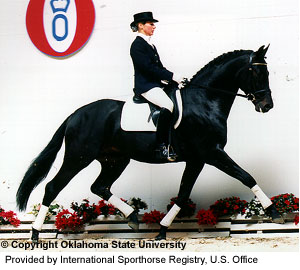 Originally developed as a good strong carriage horse, the breed contains Spanish, Neopolitan and Barb blood, along with Thoroughbred and Hannoverian. The early Oldenburg horses were well-known for consistency in conformation, great power, and their magnificent coal black color. They were also famed for their kind character and extreme willingness to work-under saddle, in front of a carriage or in the fields. During the present century, as the need for carriage horses dwindled, more Thoroughbred and Norman blood was introduced, resulting in production of a magnificent all-purpose saddle horse.

Oldenburgs are used today for show-jumping and dressage and three day event as well as occasional driving.

Graf Johann XVI von Oldenburg (1573 - 1603) started the many breeding farms in his region for the purpose of producing war horses, which were given as gifts to important rulers and those who had distinguished themselves as heroes in war. He used Turkish, Neopolitan, Andalusians, and elegant Danish stallions to improve his Friesian horses, described as being large and strong. 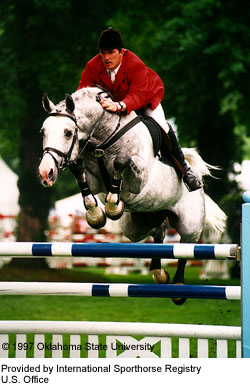 Graf Anton Gunther von Oldenburg (1603 - 1667), who became even more famous than his predecessor, traveled extensively throughout Europe and brought back to Oldenburg the elegant stallions of Naples, Spain, Poland, England, Tartary, and Barbary. Graf Anton Gunther permitted his tenants and other commoners to use his stallions, and soon the 17th Century Oldenburgs were in great demand throughout Europe, serving as elegant riding horses and tall, very attractive carriage horses. Leopold I, King of the Holy Roman Empire, rode through Vienna on his wedding day astride a black Oldenburg stallion. He was followed by his wife who sat in a splendid carriage pulled by eight ermine colored Oldenburgs. Anton Gunther was famous for his traditional dressage riding, most notably the passage on his famous Oldenburg stallion, Kranich.

In addition to the efforts of the Oldenburg rulers, the modern horses also owe their refinement in part to the introduction, during the late 18th and very early 19th centuries, of English Thoroughbred blood. The English Hannoverian King, George I, together with his successors, took an interest in the horses bred in their country of origin and sent over a great many Thoroughbreds to improve the local stock.

The war with Denmark and the difficult times during the French Revolution made it difficult for Graf Anton Gunther to continue his efforts at refinement of the Oldenburg horse. Government sponsored breeding entered a brief hiatus, which ended in 1820.

From 1820 to 1897, three important events took place which began the movement of Oldenburg breeding to its present state of scientific management. Any one of these events would have been significant in itself. Combined, they represented a watershed in the development of the breed.

During the year 1820, a law was enacted which forbade the use of any but government-approved stallions in a breeding program. The first of the stallion testings was held on June 30th of that year.

The other two events of major import were the foundation of the Oldenburg studbook; the enactment of hip and neck branding for the identification of approved, registered horses (1861); and the founding of two breeding societies, under the breeding law of April 9, 1897.

The Oldenburg horse once again took on a mantle of fame, becoming a highly desirable breed, at the time mostly as elegant, supple, fine-moving carriage horses. Some were even exported to the United States. In 1922 the Oldenburg registry contained 3,250 stallions and 34,000 mares.

The invention and acceptance of the automobile as a means of transportation resulted in a natural reduction in the need for carriage horses. The breeding aim of the Oldenburg societies, along with their counterparts in other breeds, changed emphasis to meet the agricultural requirement for strong, hard-working horses. Additional Thoroughbred blood was introduced to create refinement and a more well-rounded all-purpose horse. The winner of the 1935 Derby, Lupus xx, and the Anglo-Norman, Condor (62.5 percent Thoroughbred) founded a new stallion line. This line produced a very consistent type of heavy, well-moving, mostly black in color, well-tempered Oldenburg mares. In keeping with requirements of the time, stallions were required, as part of their performance tests, to pull a heavy sledge at the walk; trot before a light carriage; and work at least 1000 meters under saddle.

Since the 1930s, the aim of the modern Oldenburg breeder has concentrated on production of an all-purpose saddle horse. To further this goal, additional Thoroughbred blood was introduced to the breed. Starting with the introduction of Adonis in 1959, Thoroughbreds such as Manolete, Miracolo, Guter Gast, More Magic, Vollkorn, and Makuba were used to make Oldenburgs even more elegant and refined.

The results of these cross-breedings were then combined with elegant sport-horse-type stallions from France, Trakehners, and Hannoverians. Many pedigrees of modern Oldenburgs thus contain some of the best Hannoverian sires, such as Absatz, Gotthard, Grande, Der Lowe; such famous Trakehners as Hessenstein, Herbststurm, and Gunnar; as well as Furioso II and Inshallah representative of French blood.

Due to their natural athletic ability, many Oldenburg horses are bought and trained for use as show-jumpers. This international sport offers great challenge, as well as significant financial rewards, and horses with the ability and talent to excel in the sport often sell for very good prices.

Most of the breeding of Oldenburg horses today is in the hands of private individuals, closely controlled by the Oldenburg Breeding Society. Unlike many other Warmblood breeds, the modern Oldenburg horse is the result of utilizing the best of all European bloodstock. Private breeders are able to travel throughout Europe and the United Kingdom, while state-controlled breeding societies are limited, by funding and other restrictions, to their local stock. Ownership of Oldenburg stallions by private breeders, who can afford the best and most expensive, has resulted in many mare owners from the surrounding Hannoverian breeding area bringing their horses to Oldenburg stallions despite the fact that breeding fees are often as much as twice those offered by government owned Hannoverians.

While many German breeding societies restrict their attempts at improvement to their own stud books, the Oldenburg Breeding Society seeks out the finest stallions from among many breeds. As a result of this effort to locate and use the finest bloodlines of France, England, Ireland, and Germany, the modern Oldenburg is slightly taller, lighter, and extremely elegant, in contrast to many other German Warmbloods.

In order for an Oldenburg stallion to be approved for breeding, the horse must first be certified by an official licensing commission from the breed society. Each year, in October, hundreds of two-and-one-half year old stallions are gathered for inspection. This group of young horses is further reduced to what must be considered the finest of the group - approximately 75-85 young stallions.

The final examination in Oldenburg lasts for three days. On the first day the young stallions are formally examined for the first time. The second day is devoted to a review of older stallions who have been brought for examination by the many breeders who have assembled from many parts of the world. On the third day, the young stallions are examined for the final time, and those to be "graded" are chosen. Also selected at this time are the finest of the young graded stallions to be designated as "premium stallions". Of the many young stallions brought for judging, only a very small percentage is approved each year.

Following selection based on conformation and type, young privately owned stallions spend approximately 100 days at the government-owned and-operated testing station at Adelheidsdorf, near Celle, or Medingen, West Germany. During this training period, under the control of a government-employed rider, the young stallion's character, disposition, willingness to work, and temperament are carefully observed and noted. In the performance test the stallion demonstrates his endurance, speed, jumping ability, general courage, manner of going and rideability. Only after passing demanding performance tests are the young stallions finally approved for breeding. A horse that may be handsome enough to be initially approved for breeding but that does not pass the performance test can not receive final breeding stock status. Those horses, therefore, who qualify, are truly identified as the finest representatives of the breed.

Despite its size, the well-bred, modern Oldenburg is a compact horse with relatively short legs; short cannons; powerful hindquarters; a long, strong neck inherited from its days as a carriage horse; a deep chest; and large hooves able to bear the weight of such a large animal. Oldenburgs are found in a variety of colors, but are usually black, brown or gray. Their appearance is accentuated by kind eyes that mirror the horse's calm tractable nature.