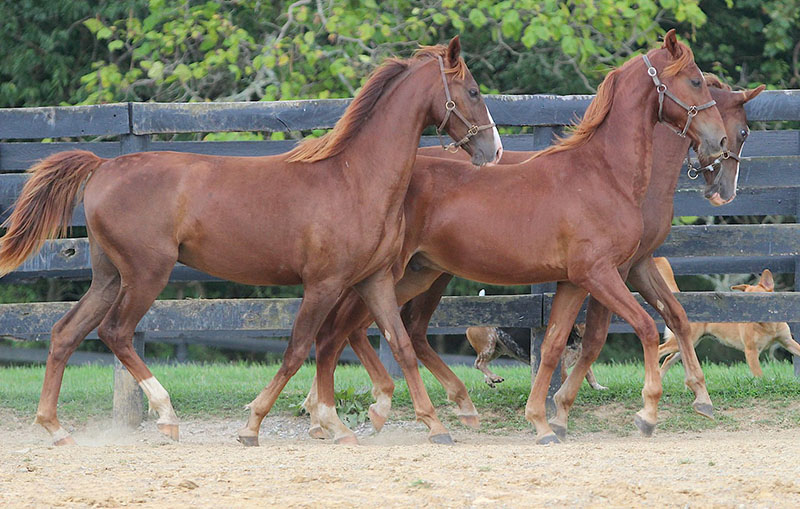 The America Horse was first mentioned in official government correspondence in 1776.

It has been written that Paul Revere's mount for his famous ride was a Narraganset Pacer, a breed which was important in the development of the Saddlebred.

In the War of 1812, similarly mounted Kentuckians ranged from Michigan to Illinois to fight the British and their Indian allies.

After that war, the production of good Saddle Horses became a priority in Kentucky. These animals played a major role in the settlement of the upper Ohio Valley. They went south into Tennessee and beyond, and across the Mississippi into Missouri. Animals from Ohio, Indiana, Illinois, Iowa, and Tennessee all made contributions to the breed. Missouri rivaled Kentucky for the best Saddle Horses and Missourians say, "If Kentucky made the Saddle Horse, then Missouri made him better."

Horse shows became a popular form of public entertainment, often held at fairs. The first recorded show as at Lexington, Kentucky, in 1817, but such competitions undoubtedly took place years before.

Denmark, the stallion who would be designated Foundation Sire of the breed, was foaled in 1839.

By the time of the Mexican War in 1846, the American Saddlebred was a well established breed. Entire companies of American volunteers from Kentucky and Missouri, mounted on these horses, fought in Mexico.

In 1856, St. Louis, the largest city west of the Mississippi, held its first great fair which featured the nation's first major horse show.

The American Saddle Horse gained fame as a breed during the Civil War, 1861-1865. Saddlebreds served as the mounts of many famous generals; Lee on Traveller, Grant on Cincinnati, Sherman rode Lexington, and Stonewall Jackson's mount was Little Sorrell. The three aforementioned horses were American type with close Thoroughbred crosses, and the latter was of pacing stock.

The Confederate commands of Generals John Hunt Morgan and Nathan Bedford Forrest were mounted almost exclusively on American Saddlebreds, and these horses performed legendary feats of endurance during the war.

Because most Confederate horses were privately owned, General Grant's order at Lee's surrender which allowed the men to keep their horses perhaps saved the breed.

After the war, the St. Louis Fair was revived. All breeds had their day in competition at St. Louis, but in the 1870's the Denmarks became dominant.

Because of the increased popularity and commercial value of the Saddlebred, enlightened breeders began to call for the formation of a breed association and registry in the 1880's. Charles F. Mills of Springfield, Illinois, began compiling pedigrees and formulating rules for a registry. The Farmers Home Journal, a newspaper published in Louisville, Kentucky, called for a meeting April 7, 1891 to organize the association, the registry was established that day....the first horse breed association in the U.S.

Despite the fact that during this period of time the American Saddle Horse was still very much a using animal, the rivalry between breeders at horse shows and especially state pride between Kentucky and Missouri, was intense. Gifted horsemen began making a living at training show horses.

A coal black stallion who was to make a great contribution in giving even greater status to shows and the breed, burst onto the show scene at St. Louis in 1893. Rex McDonald was beaten on but three occasions, was idolized by the public, and visited by Presidents of the U.S.

In Kentucky, an unusual colt of predominantly trotting blood with a dash of Denmark was foaled in 1900. Bourbon King was sold as a weanling to Allie G. Jones, North Middletown, Kentucky. He was a sensation as a five-gaited show stallion, winning the grand championship at the Louisville Horse show as a three-year-old. Living to the age of 30, Bourbon King was the great progenitor of the Chief Family.

While most admirers of the Saddlebred love the beautiful show horses, they are now needing to reestablish his worth as a pleasure and using animal. After all, that is how the breed was developed.

Country Classic was winner of the Challenge of the Breeds at the St. Louis National in 1984. This contest between selected representatives of the major breeds features the horses in various disciplines including jumping, barrel racing, driving, etc.

Other breeds, notably the Tennessee Walking Horse, (which evolved essentially from Saddlebreds) Standardbreds, Morgans, and Arabians try to emulate them in the show ring, but none can compare.

On the other hand, American Saddlebreds have been successful in most equine disciplines from cow horses to jumpers, dressage to carriage horses. If conditioned and trained properly, Saddlebreds are capable of almost any task they are asked to perform.....and they do it with style.

This breed has a long and proud history, from the battlefield at Gettysburg to the bright lights of Madison Square Garden, and a tremendous legacy of service in between. The creation of man and nature in concert, the American Saddlebred Horse is truly "The Horse America Made."