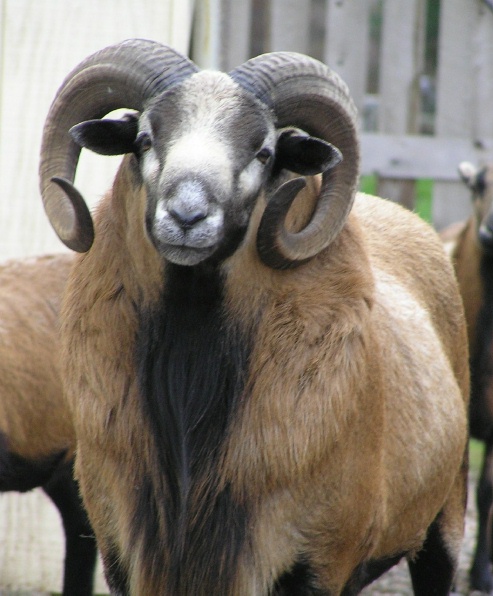 The American Blackbelly sheep is a hair sheep, originally developed by crossbreeding programs involving primarily Mouflon and Barbados Blackbelly. Resulting hybrids produced poor horn growth that interfered with the animals' faces. Repeated back crossing on the Mouflon improved horn growth to the extent that the hybrid attracted the attention of trophy hunters. Eventually, a strain of exotic looking animals with massive horns evolved and came to be referred to as "Corsican" in reference to the origin of the Mouflon ancestors. The original cross has subsequently been developed into several distinctive breeds of hair sheep. The American Blackbelly is a breed of Corsican descent that is readily by a very well-defined coat pattern and is registered by the Barbados Blackbelly Sheep Association International. Rams generally display spectacular horns, while ewes generally are polled (hornless.) The sheep sport a distinctive hair coat in a range of tan to brown to red, with dramatic black markings.

The American Blackbelly is a thrifty, energetic, small-to-medium sized sheep with a strong flocking instinct. It is well adapted to a broad range of environments, breeding goals, and management styles. On the farm, it is desired for its productivity and thriftiness, great prolificacy, and fairly low maintenance. Mature ewes generally have two to three or more lambs in any season, and depending on management, are capable of three litters every year and a half or so. They are very good mothers. Because of their fecundity and out-of-season breeding, ewes are suited to an accelerated lambing program.

American Blackbelly sheep will grow more or less winter wool, mostly in response to local winter conditions, which is entirely cast in spring/summer to reveal a coarse, flat hair coat with distinctive, antelope-like markings. It is never docked or sheared.

In certain parts of the country, the primary focus of many breeders is breeding trophy class rams. However, this versatile animal is enjoying growing popularity outside game ranching as an important asset to the small farm. In addition to the continued economic importance of trophy rams, the American Blackbelly is adaptable to many management programs and objectives. It is capable of uses ranging from biological weed management owing to its foraging capabilities, to exotic, exceptionally delicious gourmet lamp. This sheep produces a lean, fine-grained, and mild meat, highly suited to the production of gourmet lamb or the religious holiday small lamb market. It also is popular with herding dog enthusiasts.