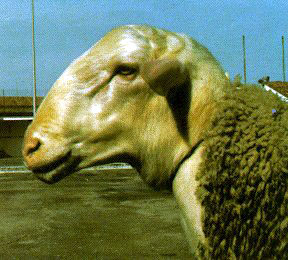 The Rasa Aragonesa breed, which owes its name to the region where it is of most importance, as well as to the length of its wool ('rasa' = threadbare), contains sheep of a subconvex profile, mediolinear proportions, and variable size according to the areas it inhabits. It is raised mainly for its meat.

The head of the breed is free of wool and neither sex has horns. Wool-free areas are covered with fine, shiny white hair. The size is variable depending on the type and areas where raised. Nonetheless, it can be considered that adult rams will weigh 50-70 kg and ewes 35-40 kg, for the Monegrina ecotype. Other strains will have rams at 65-85 kg and ewes at 40-50 kg.

Ecotypes.-Various ecotypes can be distinguished among the Rasa Aragonesa, whose names proceed from the area they inhabit: Rasa Monegrina (from Los Monegros); Turolense (province of Teruel); Ansotana (Anso Valley). It is, however, true that they do not pertain exactly to these areas. Another ecotype must be added to this group, one that is modern and that has evolved from the others, and which lives in the fertile areas of the region. This new strain, called Mejorada ('improved') is increasing the census considerably, in some areas endangering its purity due to numerous instances of uncontrollable crossbreedings that are taking place. 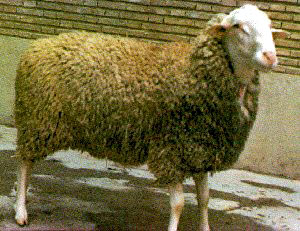 The Monegrina ecotype, whose numbers are currently low, is smaller as a result of the quite harsh environment in which it is raised. On the other hand, the Turolense is bigger, with elongated shapes and greater length of extremities. The Mejorada strain is more compact. Yet the sharpest differences are to be found between the three types mentioned and the Ansotana, considering the characteristics of the fleece of this latter strain, being formed of elongated and pointed strands, with long and uneven fibers. This has led to the situation whereby the Roncales variety in Navarra, very similar to the Ansotana, is called the 'Navarran Churra'. 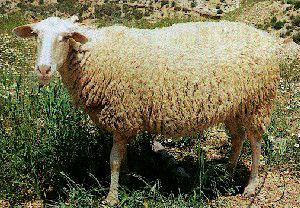 Traditionally, and as defined by certain ethnologists, Spanish sheep breeds of medium quality wool are considered to have originated from the crossbreeding of fine-wool strains (Merino) and those with coarse wool (Churra and Lacha). This viewpoint is overly simplistic. Although it is possible that with the origin of the Rasa Aragonesa there may have been a certain Merino and Churra component, it is necessary to look for the presence of other stock in its formation. Along these lines, note must be taken of primitive cirtoid sheep, of white color and medium quality wool, which gave rise to a group of French breeds who show notable coincidences with the Rasa Aragonesa (the Lacaune, Central Mountain White, Prealpine, etc.); it seems possible that this same breed, as it spread toward the south, was the originator of the breed in question.

The Rasa Aragonesa has been influenced by other breeding stock, which in times past was dedicated to improving the wool, a product that received special attention. For a good number of years, its selection was the focus of work carried out by the Regional Wool Producing Center of Aragon. During the 1970’s and 1980’s, as its meat value has increased and its wool value decreased, work with the breed has been directed toward the industrial former quality. The result is that there has been frequent industrial crossbreeding with rams of meat-producing specialty. In view of this situation, the Genealogical Register for the Rasa Aragonesa was established by Resolution of the General Office of Agricultural Production, June 30, 1981, with the goal of intensifying selection, while protecting and promoting purebred offspring. This Register is kept by the National Association of Breeders of Select Rasa Aragonesa Livestock, as a Collaborating Agency of the Ministry of Agriculture, Fisheries, and Food Production.

According to the official 1982 census, the Rasa Aragonesa numbered 2,777,190 head, of which 2,202,838 were over one year of age. This makes it second-ranked by number among Spanish breeds, following the Merino, and representing 16.2% of the national total.

In the face of a strong trend toward a decline in the Spanish sheep population, the Rasa Aragonesa has remained stabilized -or even showing a slight increase- during recent years. This alone reflects the importance of the breed, the only sheep that is able to make use of the resources of the arid parts of the region. Elsewhere, it represents the main source of income to a large number of families in the countryside.

It is found over a wide area, consisting of almost all of the three Aragonese provinces, as well as the extensive area of Navarra that is not occupied by the Lacha, the southern part of Alava, eastern Logrono and Soria; it also lives in western Lerida, a large section of the province of Tarragona, and the northwest of Castellon de la Plana. In short, it occupies the, greater part of the Ebro basin.

Among the outstanding qualities of the Rasa Aragonesa are its high degree of ruggedness, gregarious instinct, pasturing ability, and adaptability to the harsh environment in which it is raised.

The habitat of the Rasa Aragonesa is basically characterized by a continental climate with a low level of unevenly-distributed rainfall (some 400 mm), freezes between October and April, land with extremely varied terrain (valleys, tablelands, the Pyrenean slopes, and mountain ranges), dry-farm lands where the main crop is cereals, and irrigated lands where the sheep go only in the fall and winter. Xerophytic pasture lands of Mediterranean type, holm-oak scrub lands, plains and tablelands with thyme, esparto, and gorse complete the make-up of the harsh and hostile environment where the Rasa Aragonesa is raised.

Rasa Aragonesa produces the commonest slaughter lamb of Aragon, called "Ternasco". To be recognized as "Ternasco of Aragon" (Specific Designation of the Spanish Ministry of Agriculture, 1992) the lamb must have a live weight of 18-24 kg at slaughter. Slaughtering will take place with the animals of 70-90 days of age. The feeding of the lambs must be done in confinement with mother milk supplemented ad libitum with white straw and concentrates authorized by the Regulatory Council. The characteristics of the meat after slaughter are:

The Rasa Aragonesa produces a fleece of medium-quality wool, white in color and with square strands, of type IV-V on the Spanish wool scale. The most outstanding characteristics of this product are as follows: