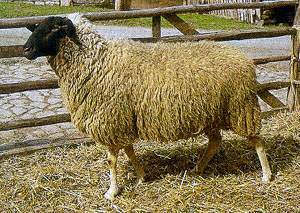 One of the oldest landraces in Germany was mentioned in 1844 in the files of the convent of Fulda: The common sheep of the Rhoen farmer is a normal German sheep with peculiar characteristics, which even in foreign countries is known as Rhoenschaf.  It is yellow-white with a black hornless head and is clothed in coarse, non-elastic wool, with little crimp.  Its body is large, the bones are strong and it lends itself to fattening.

Pictures from 1873 show that the Rhoenschaf then was similar to the one of today, despite cross-breeding attempts with Cotswold, Oxfordshire and Merino-rams. Even today it is a medium to large-sized sheep with long legs and no horns. It is the only breed with white legs and black head that is free of wool.

Most likely, the Rhoenschaf existed already in the 16th century, because the oldest shepherd regulation was found in the Rhoen town of Tann, dated from the year 1548. At that time breeds as we know them, didn't exist yet. Those sheep had white, brown, black, even piebald plain fleeces that were either fine or coarse. Their heads where broad or narrow and came with or without horns.

The origin of all plain-wool landraces was the European Zaupelschaf, a dual-coated sheep with a black or red head and narrow ears. Those rams had horns.  In the 16th century shepherds had tried to unify their flocks, to improve the fleece quality by crossing the Zaupelschaf with a heavy, plain-wool Flemish sheep. Most of the old landraces ceased to exist when Spanish Merinos appeared around 1765. But the Rhoenschaf, found its niche and survival in the Hessian-Bavarian-Thuringian triangle.

In October 1813, when Emperor Napoleon staged a battle in the Rhoen, he ate the meat of the Rhoenschaf and loved it so much, that he initiated the trekking of Rhoenschaf flocks from the Rhoen to Paris. The French called them Mouton De La Reine, which means royal sheep.

In the middle of the last century the Rhoenschaf population had expanded to hundreds of thousands, and their export flourished throughout Europe. This trend was reversed with the French import restrictions that were imposed to curb epidemics.

Today's Rhoenschaf is a medium-sized sheep. Its noble, hornless head with the Roman nose profile is black and slender. The wool starts behind the ears and the sheep is decorated with a dark collar. Ears are long, broad and slightly hanging. Hard hoofs support long, sturdy, white legs, that march easily and help it safely across rough and rocky terrain. It has a long breeding season and lambs easily. The long, white fleece has a fiber diameter of 32-35 microns and can be spun into sturdy knitting yarn. The wool yield is 3-6 kg and the sheep weigh 60-95 kg. The meat is delicious and has a slight taste of venison.

This extremely hardy and frugal landrace is well suited for the wet climates of rough highlands, where it is useful in landscape preservation. In the higher regions, the sheep feed on rough grasses and tree sprouts; in lower areas they groom the meadows that are dotted with fruit trees.

The Rhoen has a yearly mean temperature of 5-7oC , a yearly precipitation of 700-1000 mm and it is endowed with lots of fog and wind. LAND DER OFFENEN FERNEN (land of open distances), is the best description for the Rhoen. It is one of the most magnificent man-influenced landscape-areas in Bavaria, and it encompasses a rich and varied flora and fauna. Spurge-laurel, monks head and wild orchids, kingfishers, red-backed shrikes and snipes can be seen next to the more common plant and animal species. Only with the help of the rugged Rhoenschaf, a carefully planned landscape preservation is possible.

Farmers united, to market the sheep products, especially the meat. Chefs of the region created appealing recipes and helped in promoting a cultural heritage. An advantage of its meat is that the taste improves with the aging animal. Therefore, the numerous summer hikers and winter skiers should order a Rhoenschaf dish in the local restaurant or Gasthaus. Buying the wool, meat or salami directly from the source is another form of preserving a breed and a unique landscape.

Since 1987 the BUND (Association for Environment and Nature protection in Germany) has been taking measures to help preserve the best advertisement carrier for a region – the Rhoenschaf. These nature protectors own a flock of about 300 ewes as of Oct. 1998, which are in the hands of an experienced breeder in the town of Ginolfs. Today, breeders from all over Germany have also chosen the Rhoenschaf as their sheep.