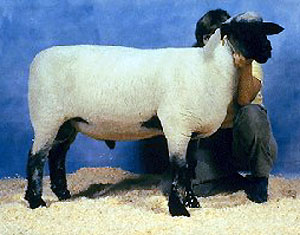 The Hampshire sheep acquired its name from the agriculture county of Hampshire in Southern England where they were developed. The Hampshire-Down evolved from the mingling of different strains of kindred blood from sheep in co-existence along the borders of Hampshire County. The Old Hampshire, Berkshire Knot, Willshire Horn and Southdown sheep were believed by most writers to be the original broods found in and along the borders of Hampshire County. Mr. John Twynam made a valuable contribution to the Hampshire Down through the use of an improved Cotswold ram and Mr. William Humphrey by the introduction of two of the largest and most outstanding Southdown rams. The sheep farmers in the district of Hampshire continued through selection to improve the Hampshire Down which was considered far superior to any other sheep. In 1889 the Hampshire Down Sheep Breeder's Association was established in Salisbury, England, where it is still active.

During that same year (1889) the American Hampshire Down Sheep Association was also organized, now known as The American Hampshire Sheep Association. Hampshire sheep were reported in the U.S. around 1840 although there are no records to indicate that any survived the Civil War. Around 1865-1870 Hampshires were again imported from England but the first authentic record of importations was made in 1879. For over a century, U.S. breeders have bred and selected Hampshires to fill specific sheep industry needs. Hampshire sheep have the genetic ability to efficiently convert forage into meat and fiber and are adaptable and productive in various geographic regions of the United States.

It is recognized that the appearance of a sheep is important but only as it relates to maximum productivity, profits and  breed characteristics. Therefore, the Hampshire Standards are made to include mainly those traits that research has found to make them more productive. Major emphasis, then is put on such traits as multiple births, weight per age, face covering, refinement about the head and shoulders, muscling and freedom from unsoundness. Even more emphasis is placed on production records and Hampshire people are encouraged to use these as most important in selection. Final selection among a group with similar production factors may be made on the basis of appearance. Hampshires are noted for their rapid growth and efficient feed conversion.

The Hampshire is a large, open faced and active sheep with a mild disposition. Mature rams should weigh 275 pounds or more and mature ewes should weigh 200 pounds or more in breeding condition. The ears should be moderate in length, thick, covered with a coarse dark brown or black hair and free from wool. The face should be of good length, dark in color and practically free of wool from the eyes down. An unbroken woolcap should extend from the neck over the forehead. Any wool interfering with vision should be considered serious. Legs below the knee and hock should be relatively free of wool. The Hampshire should show quality without weakness and size without coarseness.