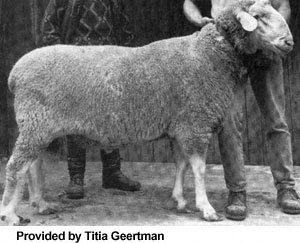 In the 18th century, Southern German Landsheep were crossed with French and Spanish Merinos, which produced the Merinolandschaf. This sheep breed is the most widespread one in Germany today, with 40% of the total German sheep population.

The Merinolandschaf of today started with the dual-coated Zaupelschaf, which already in 1539 was not liked because it produced inferior wool. For that reason it was crossed with the Marschschaf from the Lower Rhine. This sheep was large, prolific and could march and its wool had a fiber diameter of 33-36 microns. Later, Merinowoolsheep from Spain and France were used to improve the wool quality.

Today these white sheep are used in landscape preservation, thus stabilizing and protecting highlands, such as the Swabian Alb in southern Germany from overgrowing. This landscape with its solitary juniper trees, thistles and pasque-flowers would disappear, if left without the help of sheep. The Merinolandschafe also forage on leftovers of harvested fields and their dung enriches the ground with natural nitrogen. These robust sheep have to be able to march hundreds of kilometers and to withstand the rigors of being outside year-round. Bound into the traditional lifestyle of the Merinolandschaf, single lambs have a better chance to survive.

From around Easter, the Merinolandschaf flocks with 300- 500 sheep are doing their preservation duty on the rough Swabian Alb. After St. Martin on Nov. 11, the flocks march with their shepherds to milder climates; along Lake Constance or the Rhine valley.

The Merinolandschaf has a large frame, a straight head with a small woolly tuft on top, no horns and rough, large ears that stick out to the side, with legs free of wool.