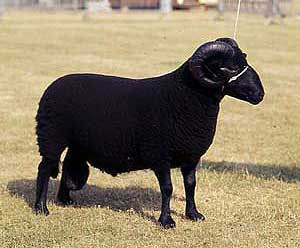 n the Middle Ages, the mutton of the black-fleeced Welsh Mountain Sheep was prized for its richness and excellence. The black wool. known as Cochddu (reddish brown) was much sought-after by merchants. During the mid-19th century some breeders began to select specifically for the black fleece color and the result is the Black Welsh Mountain sheep. Flocks of the pure breed are now widely distributed throughout the United Kingdom, with flocks also in Ireland and the USA.

The Black Welsh Mountain is a small, black sheep with no wool on the face or on the legs below the knee and hock. The rams are typically horned and the females are polled (hornless). 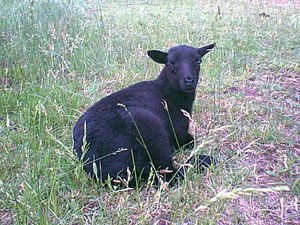 Although it is bred today perhaps as much for decorative value as for its commercial importance, it nevertheless grows wool which is sufficiently fine, soft and densely stapled to be regarded as a specialty type and the fleece is used to good effect in combination with other wools. Always black, it can be used undyed for many cloths. The average fleece weight is 2.5-4 pounds. The staple length is 8-10 cm and the spinning count is 48's-56's. Sources indicate there is also a market for the pelts. In the USA, Canada and Japan the fleece has generated special interest for home spinning and weaving. The wool now commands its own grade by the Wool Marketing Board.

The breed are seasonal with lambing usually taking place from February to March (sometimes as late as April). Lambing percentages in the order of 175% have been reported with selected flocks as high as 200%.

In addition, the Black Welsh Mountain exhibits resistance to both fly attack and foot infections. They also have good soundness in the feet and legs. 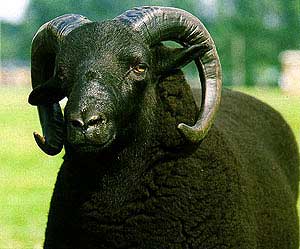 Sources indicate a premium quality meat is obtained from the Black Welsh Mountain with close grain, light bone and a favorable meat to bone ratio. The small popular cuts are full of succulent lean and with minimum of wasteful fat. The meat is close in texture, rich in color, full of value and of distinct flavor. The major proportion of the weight is in the more valuable cuts. The finished lambs average 30-38 lbs. carcass weight. The ewes cross well with meat producing rams for fat lamb production.

The breed has strong, historical links with the Royal Smithfield Show which date back to the 1920s. Many successes have been scored at this show, particularly in the carcass section.