The Tunis is one of the oldest 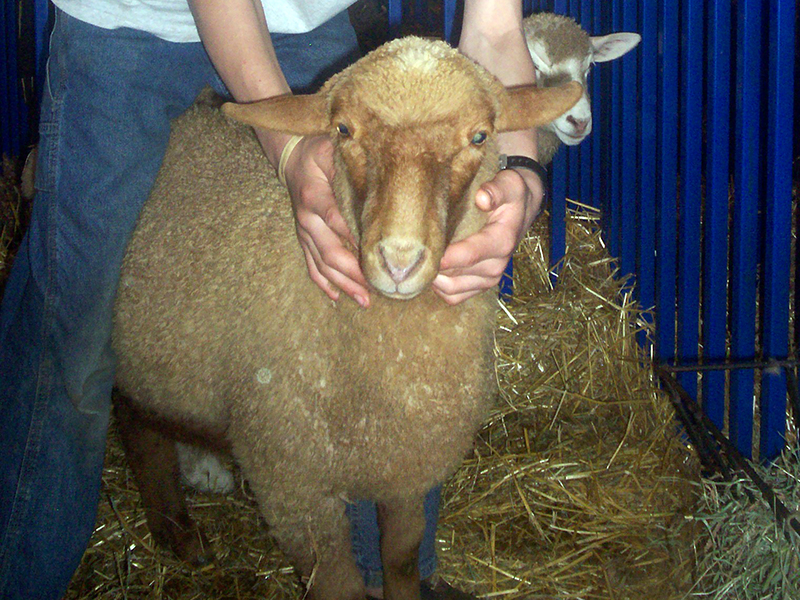 breeds indigenous to the United States.  It is a medium-sized meat-type sheep characterized by creamy wool, copper-red colored faces & legs, pendulous ears, and minor fat deposits over the dock area.

The American Tunis evolved from a number of importations of fat-tailed sheep from Africa and the Middle East in the late 18th and early 19th centuries. These sheep were crossed with some established European breeds to improve the meat characteristics.

The earliest documented importation occurred in 1799. They came as a gift to the U.S. from the ruler of Tunisia, his highness the Bey of Tunis, and were entrusted to the care of Judge Richard Peters of Pennsylvania who became an outspoken advocate of the breed. By the 1820's, Tunis were in much demand by butchers in eastern Pennsylvania. Descendants of Judge Peters' sheep, as well as additional importations of fat-tailed sheep became established in Maryland, Virginia, North and South Carolina, and Georgia. Thomas Jefferson imported "broad-tailed" sheep and kept them for many years. He preferred them over his Merinos for their mutton and wool-producing attributes. The breed was quite popular as in 1892, Ezra Carmen in a chapter of A Report of the Sheep Industry of the U.S. wrote, "but for the introduction of the fine-wooled Merino, these Tunisian sheep would probably have become disseminated throughout the U.S. and in some of them have become the prevailing flocks."

Some breeders desire to preserve and utilize a heritage breed for its own worth.  Others are investigating the economic uses for the American Tunis. Their role in crossbreeding has traditionally been to produce premium lambs for the hot house/ethnic market on the Eastern seaboard. This is one of the reasons Tunis have remained so popular in the East while remaining almost unknown in other parts of the country.

Tunis are also known for their disease resistance and their ability to remain productive on marginal land. They also exhibit a tolerance for both warm and cold climates.

Tunis wool is a lustrous 24-30 microns, long stapled 4-6 inches that has found favor in many fiber and textile enterprises. Ewes typically shear a fleece weighing 6-9 lbs of this 3/8th's blood, 56-58 spinning count wool.

At birth, Tunis lambs weigh 7-12 lbs. Mature rams in breeding condition weigh between 175-225 pounds and measure 28-30 inches at the withers. Mature ewes should be 25-50 pounds lighter and 2-4 inches shorter. Individual animals in show condition will likely exceed these weights. The breed is alert and their eyes as well as ears convey intelligence and grace.

When Tunis lambs are first born they are red or tan in color. A white spot is sometimes present on the forehead and on the tip of the tail. The lambs gradually turn white as the wool grows although the hair on the face and legs retains a reddish or tan color. Both rams and ewes are polled. Some sources also report an ability to breed out of season.

Although Tunis are currently listed as rare with the American Livestock Breeds Conservancy (Box 477, Pittsboro, NC 27312), the NTSR has surpassed 1000 lamb registrations per year. Attesting to the breed's wider acceptance and growing popularity there has been a steady increase in registrations for the past 10 years.

Tunis Sheep GalleryTake a closer look at the Tunis breed.