The home of this breed are the alpine 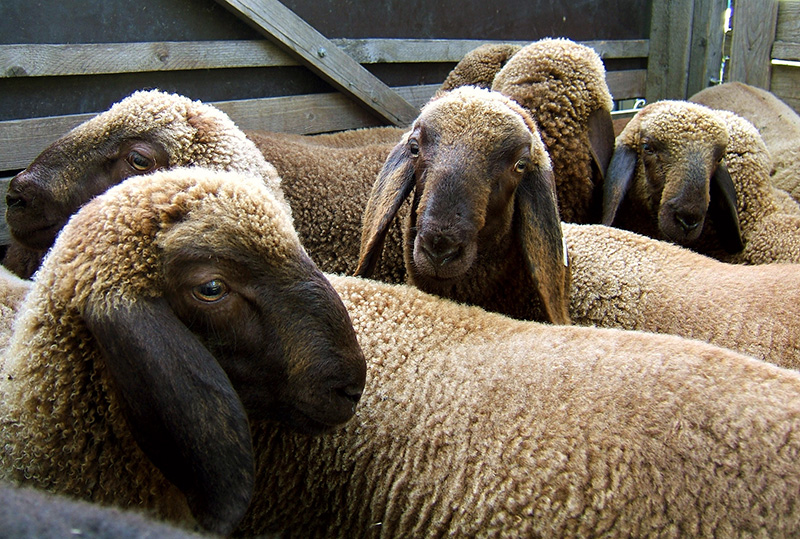 regions of Bavaria (Germany), Tyrol (Austria), Southern Tyrol (Italy) and the Swiss Canton of Engadine. In the past years the Brown Mountain Sheep has gained popularity beyond its original borders. A survey in 1981-82 showed 315 sheep in Germany, where only 10 years later the number had risen to 947 sheep with 67 breeders. The Brown Mountain Sheep descended from the Tyrolean Steinschaf (Stone Sheep), which can be of all colors, one color per sheep, and it is rarely white. The many shades of gray and brown of the Steinschaf can be seen in the many traditional pieces of clothing that are still produced and worn today in Upper Bavaria.

Cross-breeding the Steinschaf with the Italian Bergamaskerschaf resulted in the large White Mountain Sheep. This was received so enthusiastically in Bavaria, Tyrol, and Southern Tyrol that the numbers of colored animals declined drastically. Survivors of the Braunes Bergschaf where crossed with Black or White Mountain Sheep, which brought it to the verge of extinction in Bavaria. Only a few breeders kept the prolific Braunes Bergschaf for its wool. In 1970 some Bavarian breeders decided to halt the decline and purchased sheep from Austria and Southern Tyrol, which helped along a slow come-back. Since 1977 the Braunes Bergschaf is recognized as a registered breed in Bavaria.

Most of the Bergschafe spend their summers roaming high alpine meadows, needing those hard hoofs and their long, water-shedding coats. In September or October, very healthy sheep march back to the valleys to get their fall shearing to prepare for a winter in the barn.

The Braunes Bergschaf is a medium-sized sheep with a slender, hornless head, and a Roman nose profile. Its ears are long, broad, and hanging. It has strong legs with hard hoofs. It is extremely hardy and shows no fear of heights. Non-seasonal breeding is possible three times in two years, and twins are the norm.

The wool is straight brown, with shades ranging from cognac- to dark-brown. Sheep are shorn twice a year, and fleece weight is 4-5 kg. Fleece is long and coarse with a fiber diameter of 32-36 microns. Wool is marketed directly and turned into knitted goods, Lodenfabrics and carpets.