The Pommernschaf is a landrace sheep 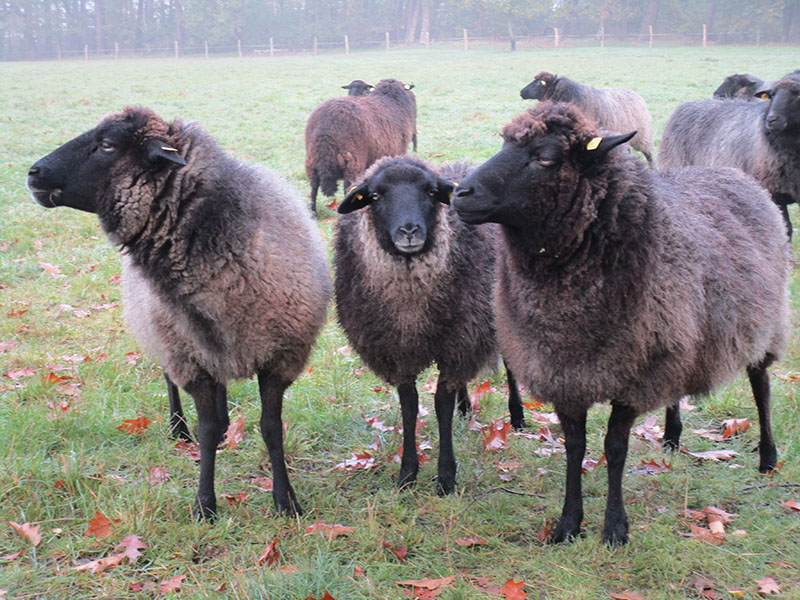 that used to be kept in small flocks along the Baltic Sea in Pommern (Pomerania) and Mecklenburg for its wool, meat and milk. The meat used to supplement their owner’s diet, the dung fertilized gardens and fields and the wool was turned into clothing. Especially fishermen appreciated the weatherproof wool products.

In the middle of the 19th century, agricultural production was intensified and also the existing landrace breeds modified. Textile industry asked for fine wool and the breeders cross-bred and kept imported Spanish Merinos which caused the decline of the Pommern.

To show the difference in income from wool, some average prices from 1825:

They are medium-sized, hornless sheep, with sturdy long legs and hard hoofs. The medium-sized head with its straight nose, as well as the limbs and tongue are black. Rams and sometimes ewes have black, rough manes. Long woolly tails round out the picture. 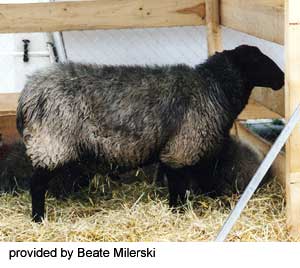 The Pommern are highly resistant against parasites. They are not fussy eaters, thrive on sandy, as well as moory ground and can be kept alone or in small flocks. They attach themselves to people, are hardy and not demanding. They lamb easily by themselves on the pasture and can be bred three times in two years.

It is a dual-coated breed, with an outer coat of 14-22 cm long wool and a fine downy undercoat. Fleece weight is 3-5 kg, with a fiber diameter of 30-40 microns. Lambs are born black and turn steel-gray, blue-gray, gray-brown, or light gray. Not permitted are the colors white, brown, black. The Pommern turn lighter as they age, therefore a silver-gray lamb will turn white and should be culled. Handspinners love the wool with its interesting shades of gray and they turn the yarn into rugged, indestructible sweaters and jackets. The handspun wool turns out softer than the same fleece spun by machine. When attempting to felt the wool, it requires more work than with a fine wool and the dark kempy hair poke out of the felted fabric.

In 1982, breeders on the island of Ruegen (belonged to the old East Germany) scraped together the remnants of the Rauhwollige Pommersche Landrace Sheep and created a gene-pool with 7 rams and 46 ewes to keep this hardy breed alive. Those had survived because the people appreciated the hardy, easy to keep sheep with the perfect handspinner’s fleece. The old East Germany did not permit export of ewes into West Germany and the first West Germans to breed Pommern sheep, had to start with a Pommern ram and another landrace – in one case the Rhoenschaf. After the East German regime smelled hard currency with the sale of Pommern ewes, they asked for astronomical prices, which nobody paid. The dark Pommern-genes are very powerful and the breeding programs in the West were successful. With Germany united, it was easy to obtain the proper breeding animals.