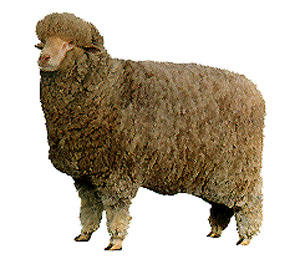 Over 95 percent of the Merinos are smooth or nearly smooth. Although, a few breeders specialize in producing "A" and "B" type Merinos. These are commonly referred to as heavy types.

The "A" type Merino was developed in Vermont through selection and inbreeding. A heavy fleece producing sheep was developed. The Merino carries a very heavy, wrinkle hide. The wrinkle should be small since extra large wrinkles may produce an excess of low grade wool.

The fleece should be very dense, even and fine. The length should be 2 inches at the shortest for one years growth. The oil or yolk in the fleece should be abundant and free-flowing. The color may vary from white to straw although, straw is preferred as it is found more often in the best specimens. Rams should shear 25 pounds or more of wool and ewes from 12-20 pounds.

In form the "A" type is often angular and has little carcass value. It is a small sheep with ewes weighing from 85-100 pounds. These sheep need to be in the hands of the skilled breeder. They are not advocated for commercial lamb and wool production.

The "B" type Merino was developed principally in Ohio. It results from breeders selecting for a heavy fleece on a sheep that has a fair mutton form. The body is fairly free from wrinkles, but it carries heavy neck folds, a rosette or button tail and frequently wrinkles or heavy folds are found behind the shoulders and on the thighs and rear flanks.

The "B" type is larger and better adapted to ordinary farm conditions than the "A" type. Ewes should weigh from 100-120 pounds and produce a fleece or 14-18 pounds. The rams range in weight from 160-180 pounds at maturity and produce fleece of upwards of 25 pounds.

The "C" type or Delaine has become the most practical Marino on the average farm and is especially adapted to range sheep production in the Western and Southwestern states. They are found in Texas, New Mexico and California. Ohio, Iowa, Michigan, Pennsylvania, West Virginia, New York and other states have many flocks, both of purebred and grade Merinos. They are found from coast to coast, from North to South border, and from sea-level desert to mountains of 10,000 feet altitude.

Delaine Merino Is of medium size. Mature ewes with full fleece average from 125-180 pounds. Rams are larger ranging in weight from 175-235 pounds. Greater size can be achieved, but is not sought after because it often leads to the production of rangy, long-legged individual with harsh, coarse, short-fibered wool. Breeders are more concerned with producing maximum weight of long, dense, fine fibered fleeces on the backs of smooth sheep of medium size compared to extreme size.

The Delaine has a smooth body and is free of wrinkles. The neck is short but sometimes has a dewlap of one or two folds. Such folds in the best specimens are more like an apron and do not extend over the top of the neck. The body may be covered with small welts or corrugations which give density or compactness to the fleece. As the animal grows older they often will disappear. Breeders selecting for extremely smooth body Merinos discriminate against animals carrying "too much skin."

The productive life of the Merino is much greater than any other breed. Breeders have choice ewes 10-12 years of age that are maintaining their high productiveness.

The long, unbroken line of breeding extending back for more than twelve hundred years of sheep bred for one specific purpose, the production of the best wool in the world, and early development under nature's law of "Survival of the Fittest" make the Merino one of the most prepotent breeds of sheep in the world. The other valuable quantities mentioned are a firmly fixed and transmitted uniformly to their offspring. The fact that a large percentage of the sheep in the world carry Merino blood means that they are the best all around breed the world has ever known. Fads, fancies, or propaganda never could have accomplished this result. Their almost universal acceptance is well married.

No other wool can compare with the wool of the Merino in its color, uniformity, strength, density and fineness. Fleece should be from 2.5 inches to 4 inches long in one year's growth. It should be fine enough to grade from 64's in spinning count to as high as 80's.