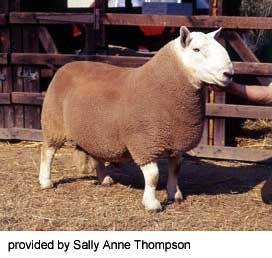 If you want a hardy sheep that can thrive whether the conditions are adverse or ideal then North Country Cheviots are for you. North Country Cheviots are a "hill breed" of sheep. They evolved on the rugged Scotch highlands and of necessity had to thrive unattended by man and search for food on wild unimproved land. In these conditions' the ewes usually lambed alone and the newborn lambs survived by their near-miraculous ability to get-up, nurse and run just minutes after their birth.

North Country lambs are still doing just that-getting up, nursing and running just minutes after birth. A long-time breeder of North Country Cheviots living in the West Virginia mountains has ewes who can lamb at the bottom of a steep hill in three feet of snow, in below freezing temperatures, with no shelter and present a pair of twins the next morning-both lambs well-fed and healthy. Upon hearing this story one may think, "Sure he does! I'll believe that when I see it." Fantasy quickly becomes stark reality when the shepherd owns North Country Cheviot sheep and sees them perform before his own eyes. No more spending those long night hours with lambing ewes, connecting newborn lambs to teats and coaxing them to get up and nurse. North Country lambs are strong at birth and have the ability to get-up, nurse and run just minutes after birth. The ewes have strong protective instinct toward their lambs, have plenty of milk and take extremely good care of their lambs.

A commercial sheep producer in Florida was having trouble with the buzzards (vultures) and alligators bothering his ewes at lambing time and killing the lambs. The alligators would steal a lamb that had just been born before it got up. The buzzards would also attack the newborn lambs before they got up to nurse or run, and were seen carrying off the lambs much in the same way as hawks would do with their prey. These vultures are playing both sides of the fence being carrion eaters and predators. The Florida producer's shearer recommended that he purchase some North Country Cheviot rams to cross on his ewes so that the lambs would be stronger at birth and "get up and go" quicker after birth. So the Florida producer did purchase the North Country Cheviot rams and had a much improved live lamb percentage the next year and years following because he continued to use North Country Cheviot blood in his flock. 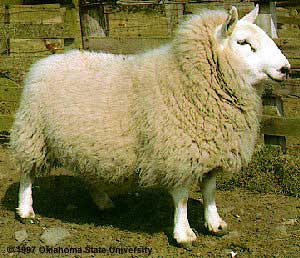 In 1791 Sir John Sinclair brought 500 "long hill" ewes from the Cheviot Hills near the English border to the counties of Caithness and Sutherland in the north of Scotland. He named these sheep "Cheviots" after the hill area from which they originated. Later on, another hill breed was introduced into the ranges of central Scotland thus the Scottish Blackface created a definite separation between northern counties of Caithness and Sutherland and the border region in southern Scotland, Most authorities speculate that both English and Border Leicesters may have been introduced into the North Country Cheviots at this time. The result was a larger sheep that had a longer fleece, and one that matured earlier. Currently the North Country is about twice the size of its southern relative.

In 1912, Caithness and Sutherland breeders formed the North Country Sheep Breeders Association to manage shows and sales. In 1945 this organization was reformed into the existing North Country Cheviot Sheep Society for registration, exporting, promotion and breed improvement.

North Country Cheviots were first imported into North America in 1944 when Mr, W.A.M.M. lnnes helped arrange the importation of ten ewes and two rams to MacDonald College, Quebec. These animals were the gift of Scotch breeders to the college, The off spring of this small flock made such a favorable impression in eastern Canada that in 1949 Mr. J.W. Graham of the Canadian federal Department of Agriculture was asked to go to Scotland and select 51 ewes and five rams. By 1953 several more shipments totaling 120 head had arrived, and some of these were used to establish flocks in the Maritime Provinces. It was also about this time that severe limits were placed upon the importation of sheep into North America because of a disease called "scrapie." The next large importation of North Countries occurred in 1975 and 1976 when the Cape Breton Development Corporation air lifted two plane loads into Nova Scotia. This large importation was only possible if some long term quarantine periods were established and enforced, The offspring of these animals were released from quarantine in the fall of 1978.

As the size and usefulness of the North Country Cheviots gained recognition in Canada, some of the breeders in the United States began to import them into this country. North Countries were imported into the United States all along the northern border and even as far south as Virginia. The early concentrations of these flocks were in Oregon, the Dakotas and in Maine. In Oregon, Don Kessi was a pioneer in the breed and has been producing and promoting these sheep for more than thirty-five years. In the Dakotas as early breeder was Laurence Reimers. The long-time and still active producer in the New England area is Jim Davidson.

The rapidly developing growth of North Country Cheviots in the United States prompted the breeders to group together and form an American North Country Cheviot Association in 1962. Mr. John C. Goater, Jr., Livestock Specialist in the State of Maine devoted much time and effort to the organization of the North Country Cheviot Sheep Association and was the Secretary of the Association for fifteen years. Late in 1977 the office was moved to Brooks, Oregon where Bonnie Henny served as Secretary. In 1980, it moved again to Longview, Washington where Ann Trimble served as Secretary for eleven years. In 1991 the office was moved to its present location -in Lula, Georgia. The officers, directors and members of this association are unique in that they are all "ambassadors" for the North Country Cheviot breed. Ask any one of them at any time for information or help and they will respond readily. The association office is always ready to help its members and any interested person with information about the breed.

The North Country is an intelligent, tough, resourceful sheep that produces both a superior lamb crop and a fleece that delights handspinners. It has outstanding crossbreeding ability and can be used as either the sire or the dam breed. The resulting lambs from cross-breeding to meat breeds have superior carcasses. At 90 to 120 days a first class North Country lamb will yield a carcass of around 45 pounds with a high proportion of lean meat of excellent quality. The cross on wool breeds develops a superior type of light shrinking, staple length, all-white wool of Medium grade. A mature ewe will weigh 180 pounds and a mature ram 300 pounds. North Country Cheviot rams impart vigor and muscling to their lambs. They are aggressive, active breeders and an ideal crossing breed.

North Country Cheviot sheep are pleasing to the eye. They are a large chalk-white, alert deep-bodied sheep, symmetrical in outline, belly and flanks well covered with wool. The rams are distinctly masculine and the ewes, strong, but feminine. The head is covered with short, glossy-white hair as are the legs. The nose is moderately long Roman to slightly Roman. Legs are medium long in proportion to size, good bone, strong pasterns and the hoofs are black.

An average fleece should weigh 8 to 10 pounds and in the grade range of 1/4 to 3/8 blood. It is of fairly fine quality, grading from 50's up to 56's Bradford count. The wool is pure white, lofty and strong, with very good staple length. It is not hard, but has a spongy feeling when grasped. The wool is largely used in the Scottish tweed trade and is a favorite of handspinners.