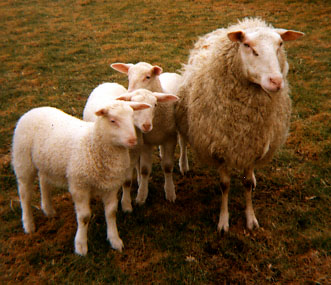 The origin of the Friesian sheep breeds is the region of the Friesland extending along the North Sea coast westward from the Weser River in the northeast of Germany along the north coast of the Netherlands and south to the Schelde (Scheldt) River at the border of the Netherlands and Belgium. Offshore is a fringe of islands including the West "Frisian" Islands belonging to Germany, and, to the north, the North "Frisian" Islands divided between Germany and Denmark.

The family of Friesian sheep breeds are of the marsh-type including the East Friesian Milk Sheep (Deutsches Friesisches Milchschaf) from East Friesland, Germany, and, from the Netherlands, the Dutch Friesian Milk Sheep (Fries Melkschaap) from West Friesland, and to the south, the Zeeland Milk Sheep (Zeeuwes Melkschaap) from the Zeeland island. These breeds are similar in appearance, polled in both sexes, with white wool and white faces, ears, and legs all clean of wool. Their most distinctive physical feature is a "rat-tail", thin and free of wool. Prints from the early 19th Century show a "short-tailed" Friesian sheep which suggests some linkage with the Northern European Short Tail breeds, the Finnish Landrace and the Romanov which is consistent with the high prolificacy of the Friesians.

The German East Friesian Milk Sheep is the best known and most important of the Friesian breeds and is the breed known in the scientific literature as the "East Friesian". It is found in small numbers in many parts of the country as a household milk producer. LItter size in the East Friesian is reported as averaging 2.25 lambs with milk yield of 500-700 kg per lactation testing 6-7% milk fat, the highest average dairy milk yield recorded for any breed of sheep. Wool production is about 4.5 kg per ewe with a clean wool yield of 65% and a fineness of 50-56s, 48-50s (German Ministry of Agriculture). The mature weight of this breed is between 150-200 pounds (70-90 kg).

The East Friesian is considered to be the worlds highest producing dairy sheep. They are highly specialized animals and do poorly under extensive and large flock husbandry conditions. It is perhaps no mere coincidence that the region of Friesland is also the origin of the Friesian cattle breed, including the Holstein which has the highest milk yield of any breed of livestock. Friesian cattle and East Friesian sheep are alike in other important regards. Neither fares well in harsh hot environments but both have produced excellent crossbreds with adapted local breeds.

An example of the dramatic effect the East Friesian Milk Sheep can have on breeds adapted to environments too severe for purebred East Friesian with the Awassi a breed adapted to the arid Middle East. Lamb and milk production among yearling Assaf is double that of the Awassi. 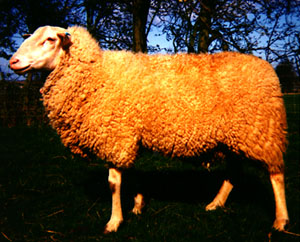 Other Dutch breeds may be derivatives of the Friesians. At the southern end of the West Frisian Islands is the island of Texel original home of the Texel breed. Photos of the "old-type" Texel show a sheep in appearance very much like the Friesians. The modern Texel has been somewhat modified in the tail and in body conformation. The Texel is now counted as a non-dairy, meat-type breed after introduction of Leicester and Lincoln into Old-Texel stock in the 20th Century. Near the Belgian border is the Vlaams Schaap or Flemish Sheep also called the Vlaams Melkschaap/Flemish Milk Sheep. The origin of the Flemish Milk Sheep is vague but it doubtless is also related to the Friesian breeds with litter size recorded as of the order of 2.5 lambs per litter. The breed is almost disappeared but was rescued by the University of Wageningen.

The British Friesland is said to be of Dutch Friesian origin. The British Milksheep carries a minor percentage of Friesland breeding but was not developed as a dairy sheep.

Technical Communication No. 8 (Revised) of the Commonwealth Bureau of Animal Breeding and Genetics, Edinburg. 268 pp. Ministry of Agriculture, Federal Republic of Germany