It would be nice to be able to trace the 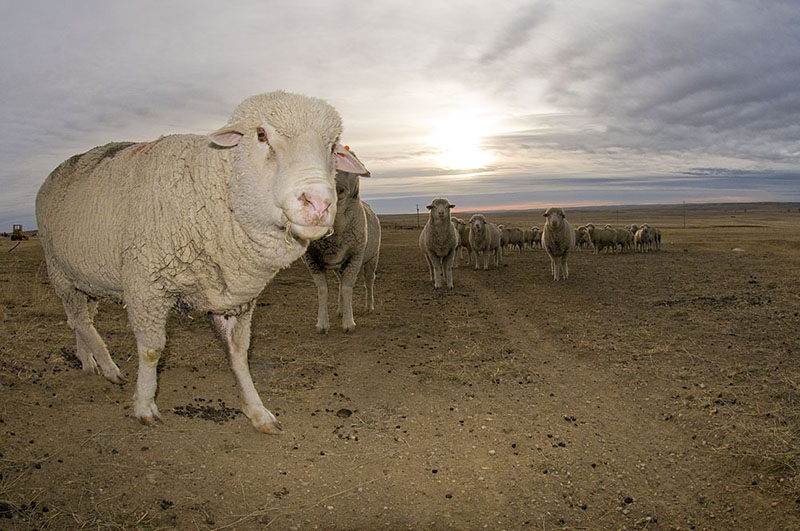 history of Targhees back to the two sheep that Noah took on the ark, but that is not the case. In fact, the Targhee is one of America's youngest breeds having been developed this century.

The Western sheep industry about 1900 was based on Merinos and Rambouillets with the emphasis on raising wool. Shortly after the turn of the century a demand began for lamb and this led to a crossing of the fine wooled sheep to develop a better lamb producing animal. The most popular method to achieve this goal was the crossing of an English longwool breed with the fine wooled breeds, that were the basis of the Western sheep industry.

The first successful cross was developed by James Little of North Otago, New Zealand, beginning in 1868. These sheep were named Corriedale after the station that Mr. Little managed. The first Corriedale were imported into the United States in 1914. About the same time the U.S. government began a program of crossing Lincoln rams on Rambouillet ewes from which the Columbia breed developed.

While these crosses were quite popular, many sheepmen felt that the ideal sheep would be three quarters fine wool and one quarter long wool, or what was commonly known as a "comeback" sheep. A name that signifies coming back to the Rambouillet from the first coarse and fine cross. To meet this demand the U.S. Sheep Experiment Station, Dubois, Idaho, began in the fall of 1926 to lay the foundation for such a breed.

The foundation was a group of 210 of the Experiment Station's cross-bred ewes, consisting of Rambouillet, Lincoln, and Corriedale blood that were bred to nine of the Station's smoothest, thickest Rambouillet rams. After three years of the program, 201 first generation ewes were carefully selected and bred intensely. These ewes weighed 91 lbs as yearlings after shearing. A wide range of variations were produced in the second and third generations, but careful selection reduced the variations in future generations.

The new breed was named Targhee after the National Forest where the animals grazed during the summer. The forest was named for a chief of the Bannock Indians who had lived in the area in the 1860's. One can not get a more American name than that. 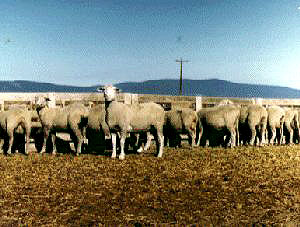 After three generations (about 1938) it had become apparent that a desirable breed had been developed and a larger genetic base was needed. New breeding schemes were developed, using the same original breeds, and the number of Targhees at the Experiment Station was boosted to over 1,000 head.

While this was happening at Dubois, the same type of sheep was being developed by individual breeders. One of the first was Henry J. Yoppe of Eureka, Montana, who started breeding three-quarter crosses in 1929 and in 1934 he bought a Targhee ram from the Experiment Station. By 1938, Mr. Yoppe was selling Targhee rams at a sale in Miles City, Montana – a sale which is now known as the Montana Ram Sale and is the premier Targhee ram sale in the nation.

Many of the ranches that bred up to Targhees were in Montana and they included Hughes Livestock, Mt. Haggin Livestock, Fulton Ranch Company, and Sieben Live Stock. An example of this method is that in 1948 it was decided by Henry Hibbard, of Sieben Live Stock, Helena, Montana, to select the best of the breeding ewes owned by the ranch and raise from them Targhee rams. To this end, approximately 1,000 ewes of "Targhee Type" were selected from the 12,000 Rambouillet ewes on the ranch and bred to rams from Dubois and Yoppe. 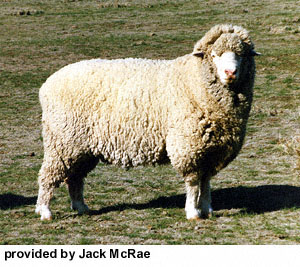 In 1951, Curtis Hughes of Stanford, Montana, sent a letter inviting those interested in forming a Targhee association meet at the U.S. Sheep Experiment Station at Dubois. This meeting was held May 16, 1951, with 17 people present. The meeting was chaired by Henry Hibbard and much of the discussion centered on how many generations of top crossing nondescript ewes, with Targhee rams, was required before a Targhee was arrived at. It was decided that three top crosses were necessary for a flock registration and five top crosses for an individual registration. At that time the only, two breeders with five generations were the Experiment Station and Henry Yoppe. An organizational committee was appointed and it was decided that a meeting would be held following the Dubois sale, in September, and at that time the association would be formed.

Since the breed was a cross-bred trying to establish type, an inspection policy was implemented and the first inspection of Targhees for registration took place February 21, 1952, when 34 Targhees from Montana State University became the first registered Targhees. The Association has a lifetime membership and Montana State University received membership number T-1. They had begun their Targhee breeding program in 1942 under Dr. R. T. Clark and Dr. J.L. Van Horn. "Van" was adviser to the Targhee Association for many years.

For a number of years Targhees were predominantly a breed of Montana, South Dakota, and Wyoming. The National Sale and membership meeting was held in Billings, Montana, each year. In 1966, a National Show was begun and the first champion ram was shown by Mount Haggin Livestock, Anaconda, Montana, and the champion ewe by Leo Pfister, Whitney, Nebraska. Also, in 1966, the membership voted to close the books and since that time registered Targhees have to be the offspring of registered parents.

By 1974, there were enough Targhees in the Midwest that the membership meeting was held in Wisconsin and since that time it has moved around the country. This year's show, sale, and meeting in Ohio, is the farthest east the event has been held.

The U.S. Targhee Sheep Association now registers over 2,000 sheep per year and has members in 38 states and Canada.