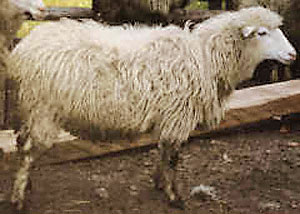 The breed got its name after the small town Bovec that lies in upper Soflorina valley which is in the Northwest part of Slovenia near the Italian border. In Trenta valley this breed is also called "trentarka" or "pure trentarka" if it has the short ears sometimes seen with this breed.

Origin and History of the Breed

The Bovska sheep breed originated in the white sheep which were once distributed throughout the Alps. Bleiweis (1871) mentioned the Trbiska sheep breed and reported that sheep with shorter ears produced more milk. Pirc reported that Tolminska and Bovska sheep breed originated from the peat sheep while in the German literature it is stated that in some Alpine valleys and swampy areas Stonesheep (Steinschafe) or Zaupelschafe were found which could have been the ancestor of modern breeds in this area. Sheep are usually bred in small flocks of ten to twenty animals, but sometimes 40 or more. After the lambs are weaned the ewes are milked in the mountain pastures with all milk being used for cheese production. Most of it is used at home but recently it has been sold in the mountain pastures.

The Bovska sheep breed used to be reared in the wider area of Tolmin but after 1950 the number of sheep decreased quickly. Mountain pastures on which sheep and goats grazed have been abandoned. In some areas cattle have replaced sheep and goats on the Alpine pastures. In the Tomlin area about 20 mountain pastures for sheep existed. In the years between 1984 and 1994 only three mountain pastures for sheep remain with a total of approximately 600 sheep. But the number of sheep as well as of sheep breeders have been decreasing. Now sheep are kept only in the Trenta valley and in some smaller valleys like Koritnica and Lepena in the upper Soflorina valley. It is estimated that only 800 individuals of this breed still exist. 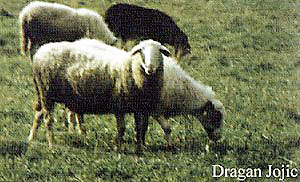 Ewes and rams do not have horns. An adult ewe weighs from 35 to 40 kg and a ram from 45 to 50 kg. Ewes lamb once a year and about 10% have twins. Ewes with twins are not selected for further breeding. Wool is very coarse, fibers are 44 microns thick. They shear between 1.2 and 1.5 kg wool a year per sheep. Wool is not used even for home production any more. The Bovska sheep breed is primarily white, but some animals are black or brown. The head is small with a convex profile. The forehead is partly covered by wool. It is typical for the sheep in Trenta valley to have small ears, sometimes resembling stumps and it is difficult to mark them. These sheep are called "trentarka". In Bovec and in the vicinity sheep are heavier and have longer ears.

The Bovska sheep brand is extensively reared. During the winter animals are fed small amounts of hay and branches of bushes so that they lose weight from December to April. This low level of nutrition often results in abortion of twinning pregnancies. In some ewes with twin pregnancy one of the embryos die and is reabsorbed so that the ewe produces only one lamb.

Milk is the main product of the Bovska sheep bred. After the weaning ewes are milked for 100 and 140 days. Ogrizek (1948) estimated the production at 65 to 80 kg during lactation. In recent years the Selection Service controls the milk yield in some flocks. The milk yield of the Bovska sheep breed in controlled flocks is higher than on average since only better flocks are controlled. Table 1 shows the milk yield results. In the mountain pastures milking and cheese production are performed in a traditional way. Cheese and curd are produced, sometime sour milk, all for sale in the mountain pastures to tourist and visitors.

Table 1: Milk yield and content of some compounds in milk in the Bovska sheep 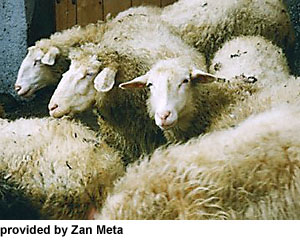 Lambs growth rate is between 150 g and 210 g/day. At the age of 50 to 80 days lambs are slaughtered. Dressing percentage ranges between 42 and 45. Meat is soft and tender with low fat content. The carcass conformation is not good. Only suckling lambs are sold, lambs are never fattened to over 20 kg.