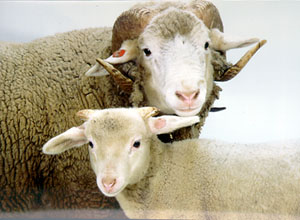 The Tavet or Nalps Sheep achieved general recognition around the turn of this century, when scientists recognized a direct descendent of the Turf Goat in this ancient breed which was already widespread in the Stone Age. The Tavet Sheep had this time regressive conditions already, and the last pure Tavet Sheep died because of inbreeding symptoms in 1954, despite efforts to maintain it.

In the Bündner Oberland, in Somvitg, in Tavetsch and above all in Vrin and in Medels some original animals have remained, for their breeders with cross-breeding with outside breeds. From the Medels sheep, also horned and similar to the Tavet sheep, the foundation Pro Specie Rara has built up herd book breeding from the year 1984, with breeders groups in all of eastern Switzerland. It is now designated as the Bündner Oberland Sheep. 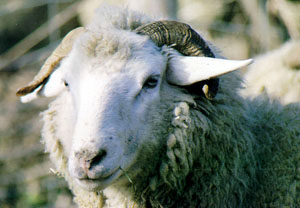 The animals are by origin small, easily satisfied and robust, of white, brown or silver-gray color. Noticeable are fine features and small, long, unfleeced heads. The weight of the ewes is between 40 and 50 kg. Depending on the valley, horned or unhorned animals were preferred. Of these the horns of the rams form powerful rolls and of the ewes fine crescents. These animals have also in their behavior and characteristics remained very primeval. They provide an excellent meat for their self-sufficiency. A high fertility compensate for the low weight and the minimal ability to put on weight. The Bündner Oberland Sheep lamb mostly twice a year, and multiple births are frequent.

At the present time there are over 250 ewes and approx. 50 rams, so that the breed again classified as secure. The breeding groups are located predominantly in eastern Switzerland.