Gute sheep is the most primitive 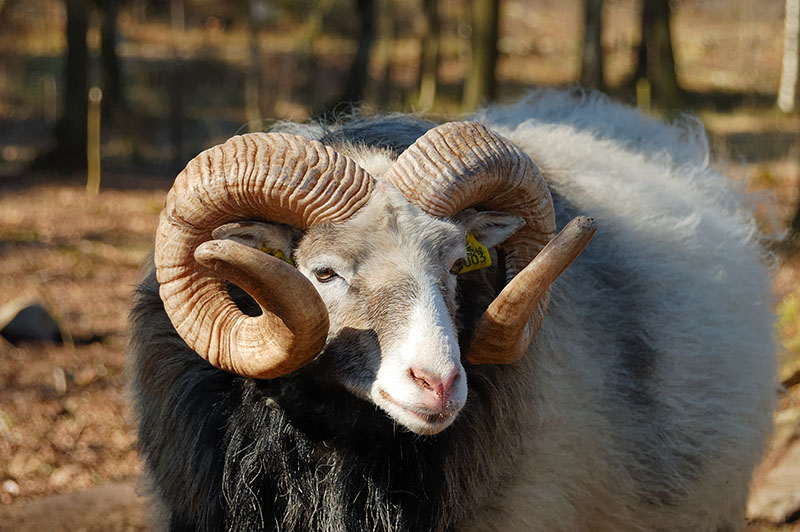 breed in the collection of breeds that make up the Swedish Landrace breed group. These breeds belong to the North European Short Tailed Breeds and are related to such breeds as the Finnsheep, Romanov, Spelsau, Shetland, Faroe, Orkney and Icelandic sheep.

Landrace sheep on the island of Gotland in the Baltic sea were little affected by the importation to Sweden of several long tailed foreign breeds during the 18th and 19th century. The native sheep had a coarse wool of several colors. The vast majority of the rams were horned while females could be either horned or hornless. Few sheep were truly polled, i.e. having depressions on the head at the horn sites. Before 1911 four-horned animals existed. Around 1920 selection among the pure Gotland landrace started, to produce sheep, that were polled in both sexes, with a curly coat and of an uniform gray color of a decided shade. This selection eventually resulted in the modern Gotland Sheep  (sometimes referred to as Swedish Pelt, Swedish Fur or Gotland Pelt). The Swedish name of that breed is Pälsfår or Gotlandsfår. After a couple of decades only a few horned sheep with the original type of wool were left.

Around 1930 Edward Graelert founded a flock of horned sheep, collected mainly from the north of Gotland. After some years four others, Nils Dahlbeck, Carl Fries, Konrad Hellsing and Arvid Ohlsson also got involved in preserving horned sheep. In 1940 probably less than 20 adult sheep existed in horned flocks on Gotland. In the beginning of the breed a few more horned animals were bought in from polled flocks. The numbers of Gute sheep have steadily increased and numbers today (1996) around 4500 ewes and 500 rams in 450 flocks in Sweden. There are some flocks in Denmark and Germany as well.

The Name of the Breed 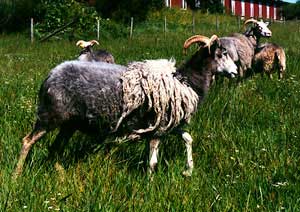 The name Gutefår (pronounced gooteh-fore) was formed in 1974 from the Swedish words (G) = Gotland and (ute) = outdoor, since the native sheep of Gotland always have been kept outdoors year round. The Gutnish name for the breed is honnlamb or hornlamb, meaning horned lamb or sheep. 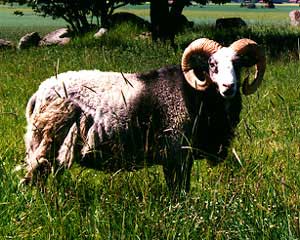 Horn Circumference at the Base

The sheep are pronounced seasonal breeders, the ewes coming into heat around the end of October – early November. They mature early and the ewes can easily lamb at 12 months of age. Ram lambs can breed in their first autumn. In their first year some ewes do not lamb, but since twin lambings are not that uncommon the lambing rate is still 100% in yearlings. Lambing rate in older ewes is 170-180%. Life expectancy is long, with healthy ewes commonly lambing until they are 11-12 years old. 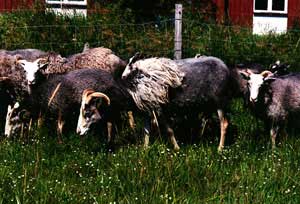 The base of the horns is triangular in males and oval in females. Rams are always horned. Ewes are also supposed to be horned but a few ewes never develop horns beyond the bud state. These cannot be considered true polled, however, since they do not have depressions at the horn sites but instead some of them can grow small scurs. Purebred Gute never have four horns.

The most common color is gray. Dark gray animals have black legs and head while light gray ones also have white and tan hair on these parts of the body. Gray sheep often have light hair around the eyes and muzzle. Black sheep occur as well as white. The white sheep are seldom pure white, but instead they often have tan patches on the neck and other parts of the body. A few other patterns occur, for example sheep with white belly (mouflon pattern) and sheep with white hair in the tear ducts (english blue).

Almost all non-white sheep have white markings. This can vary from only a small white star on the forehead to a blaze and white tail and white legs. It seems that the light gray sheep have larger white areas than the dark gray ones. Some sheep are piebald.

The wool is coarse, and may be straight or wavy. It is a mixture of fine wool, long coarser hair and kemp fibers. On the neck and along the throat the sheep have long thick mane hair, much more in males than in females. The gray wool is a mixture of white and black fibers, the fine wool is then white and the coarser hair black. In light gray individuals many fibers are tan. In dark gray individuals some of the finer wool is black. The sheep never have wool in the face or on the tip of the tail. Most sheep shed their fleece partly or entirely in the beginning of the summer.

Föreningen Gutefåret (The Gute Sheep Society) was founded in 1977. It is a non-profit association, dedicated to the preservation of the breed.