The Shropshire breed of sheep originated 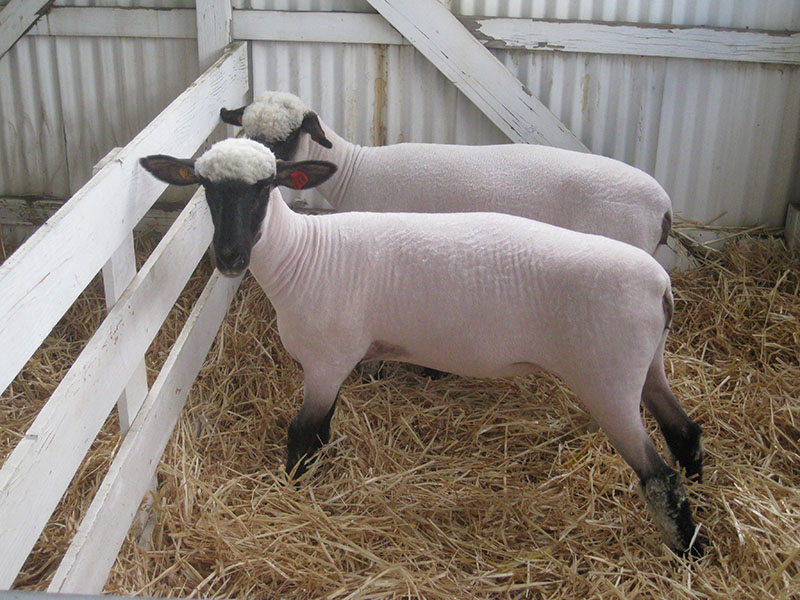 in the counties of Shropshire and Staffordshire in central western England. Records are not clear as to exactly how the breed was developed. Some maintain that it was formed by selecting and mating the best from the old native breeds of the two counties, while others say that it came into existence through the crossing of improved Southdowns, Leicesters and Cotswolds with the native black-faced sheep that were known as Longmynd. Southdown rams were used to breed out the coarseness and horns of the original sheep while Leicester and Cotswold blood improved the length of the wool and gave size to the sheep. When these various elements had become sufficiently fused, the breed became known by the name it now bears in 1848.

The rise in popularity of the breed was rapid. Shropshires were first exhibited in a special class for short-wooled sheep at the Royal Show in Gloucester in 1833. In the year 1859, the breed was awarded a place on the prize sheet of the Royal Agricultural Society as a recognized and distinct breed. So rapidly did the breed increase in popularity that by 1884 at the Shrewsbury Show more that twice as many Shropshires were shown as all other breeds combined.

The first importation of Shropshires into the United States was made into Virginia about 1855, although we have no remaining record of who brought these sheep to America or of what became of them. In 1860, a ram and twenty ewes were imported into Maryland by Samuel Sutton. Following that date, thousands were brought from England. Distinguishable by ears so small they "fit in cupped hands", the Shropshire's adaptability to all kinds of pasture land, hardiness to withstand our variable climate, close and oily wool to shield them from the snows and sleet, their longevity and prolificacy, and many other outstanding qualities made them widely popular in the States. By 1880 Shropshires had spread through most of the colonies having farm flocks.

Shropshires become known as "The Farm Flock Favorite" and boasted “wool from the tip of the nose to the tip of the toes." Ironically this very boast contributed to the decline in popularity of the breed which occurred in the 1940's and 1950's. During these years breeders stressed extreme wool cover and fine points of appearance. A fad also developed for a very short, compact sheep. As a result, the Shropshire slowly began to lose much of its size, and it became more and more necessary to trim around the eyes to prevent "wool-blindness." As a result, the Shropshire lost its once prestigious position as a commercial flock sire.

Many breeders felt that in order to remain competitive the Shropshire must be returned to the characteristics which had originally made it so popular: a large, growthy, meaty sheep with wool cover on the head not so excessive as to impede sight. Beginning with the importation of English Shropshires by progressive breeders, the breed started on the road to regaining its prominent position in the sheep industry. Today's modern Shropshire is not only attractive in appearance but has the conformation, size and fleece producing ability to make it extremely useful to the farm flock producer.

Today's Shropshire is one of the better dual-purpose breeds adapted to farm conditions. Shropshires are a medium sized sheep which stresses soundness, carcass quality and breed type. Shropshire lambs are hardy, vigorous and meaty. They have the ability to feed out to choice grade at an earlier age and with less investment in feed, thus producing greater overall profit.

The Shropshire is one of the heaviest wool producers among the medium-wool breeds. The fleece is dense and elastic to the touch, light shrinking and of a quality which is readily marketable. Rams may produce a fleece of 10-14 lbs while ewes will shear an average of 9-11 lbs.

Shropshires are gentle in disposition, making them perfect for the farm flock or as a club project for children. The rams have a lean, well-muscled body structure which they transmit to their offspring, making them popular with the commercial as well as the purebred breeder. The ewes are prolific and long-lived with wonderful mothering and milking abilities. There are seldom any lambing problems with Shropshire ewes. Lambing percentages of 175-200% are not uncommon in a flock of Shropshires. Mature weights for Shropshire rams will vary from 225-250 lbs (102-113 kg).  Female Shropshires will range in size from 150 to 180 pounds (68-81 kg).  Fleece weights from mature ewe are between six and ten pounds (2.7-4.5 kg) with a yield of 50-75%. The fleeces are considered medium wool type with a fiber diameter of 24.5-32.5 microns and a numerical count of 48-60. The staple length of Shropshire fleece ranges from 2.5-4 inches (6-10 cm).

Shropshire Sheep GalleryTake a closer look at the Shropshire breed.