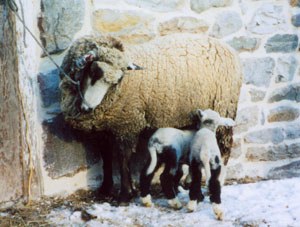 The Romeldale is a breed of sheep developed by A.T. Spencer. He purchased several New Zealand Romney Rams in 1915 that were brought to the Pan-American exposition in San Francisco. He felt the Romney breed would increase the staple, length, and carcass quality of his Rambouillets. Through many years of selection, the Romeldale breed was developed, with fleece properties of 60-64's, extremely high yield, and uniformity, including carcass cutability superior to other white-face breeds.

During the 1960's, Glen Eidman, a partner of J.K. Sexton, found in his purebred Romeldale flock in multi-colored ewe lamb. Two years later a ram lamb of the same barred pattern was born and when cross with the ewe, the resulting offspring were of the same color pattern. Through subsequent breeding and further mutants from the Romeldale flock, the C.V.M. Breed was born. These sheep, christened C.V.M.'s or California Bariegated Mutants, were kept by Eidman who then placed emphasis on spinability of the fleece, twinning, and lambing ease. During the 15 years Mr. Eidman spent developing the breed, not a single replacement ewe or ram was sold so that only the highest quality of genetics were used to replace the nucleus.

In 1982, the flock was totally dispersed, numbering approximately 75 and selling to over a dozen buyers from throughout the state of California. Since then the C.V.M.'s have been kept pure in some flocks, while in others they have been crossed with Rambouillets, Lincolns, Polypay, Suffolks, and the list goes on!

The C.V.M. face is generally free of wool and covered with soft hair, although sometimes wool is found on the forehead. The body is sturdy and well boned with a long straight back. Rams should appear strongly masculine with ewes conversely feminine and refined. Eyes should be large, clear and alert with ears medium in size. Neck and shoulders should be largely free of skin folds. Legs should be strong, medium in length with pasterns strong and upright. Hooves should be black in color. Sheep should move well with a free and easy walk.

Mature rams weigh from 175-200 pounds and are aggressive and virile breeders, able to cover more than the average number of ewes. Ewes weight from 120-150 pounds, are protective, dedicated mothers, prolific and long-lived. Twinning and lambing ease are part of the breed emphasis and if left with the ram, ewes are known to breed while suckling lambs.

C.V.M. color patterns vary widely, especially in the darkness of body wool. Unlike many sheep, the C.V.M. will not fade with age, but rather darkens from birth to their first year. With the wide variety of color patterns, including dark gray, black, brown, moorit, and spotted, not excluding the barred face badger pattern typical to the original C.V.M.'s, a breed description has been difficult.

Fleece should be bright, uniform and dense, of high yielding, long staple, fine wool. Sheep will average about 8 pounds of wool yearly with spinning counts from 60's to 62's quality. 12 month staple length averages 4-6 inches. Wool should have a well defined crimp from base to tip, be pliable to the touch and free from kemp or objectionable fibers.

High quality variegated fine spinning fleeces are in demand, as there are not many of them on the market. Spinners have a tendency to shy away from the fine count, but once they have handled and spun the wool, they enjoy the quality, softness and ease of spinning. The C.V.M. fleece is ideal for soft yarn that will not be scratchy to the skin. At the 1984 National Handcrafters Showcase, the "Best of Show" was a ladies suit made from C.V.M. wool.

Glen Eidman (as per notification via email from Karen Henderson, Grass Valley, CA)