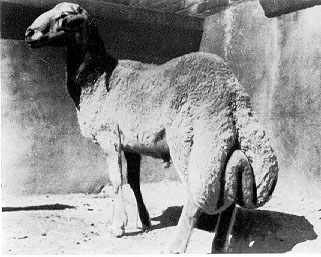 Ecological conditions also vary greatly in the agricultural areas, and so do the breed characteristics of the sheep. The Han, another type of Mongolian sheep, was developed in the semi-humid agricultural areas (Henan, Hebei, Shandong, Anhui and Jiangsu Provinces). There are two types of Han which in 1982, were claimed as two different breeds: large tail Han and small tail Han.

The Large-tail Han are polled and are characterized by a long, broad, fat tail, with a thin twisted end turning upwards between two lobes, and broadest at the base. Maximum weight being 25 kg. Since the tail is too heavy for the sheep to move around easily during grazing, this type (or breed) is only adaptable to the plains.