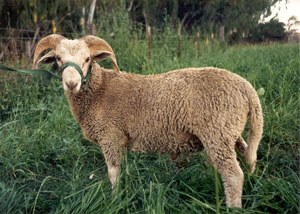 There is considerable uncertainty as to the exact origin of the sheep of Santa Cruz Island, even to the century in which sheep were placed there. Speculation is that Merino, Rambouillet and perhaps some Churro figure in the Santa Cruz sheep's background, and it is certain that the sheep have been feral for the last 70 years.

After years of adaptation to the rigors of the island, Santa Cruz sheep now tend to weigh less than domestic sheep on the California mainland, often have little or no wool on their bellies, faces and legs, and are exceptionally hardy. They have virtually no birthing problems, a high lamb survival rate, and manage to survive on very little forage.