The exact history of the Dorset sheep 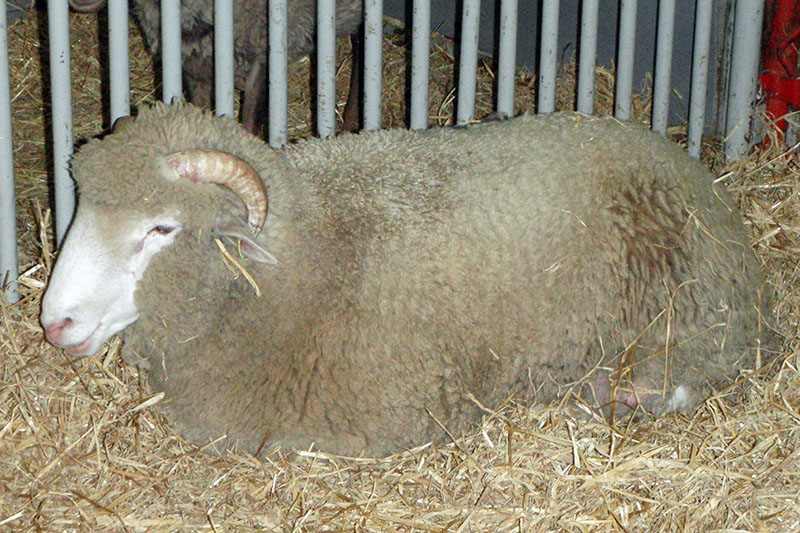 is found wanting for some positive record of origin. History does tell us that centuries ago, Spain wished to conquer England, and possibly during this time, the Merino sheep were brought into Southwest England and were crossed with the Horned Sheep of Wales, which produced a desirable all-purpose sheep which met the needs of that time. Thus began a breed of sheep which spread over Dorset, Somerset, Devon, and most of Wales and were called Horned Dorsets. In the USA they are called Dorset.

Dorsets in America, in a publication called Sheep Industry in the United States, written by Ezra Carmen, H, A. Heath, and John Minton, all of whom were Oregon pioneers living in the Salem, OR area, we learn of Dorsets being in Oregon in 1860. These shipments were brought to the West Coast from England by the Hudson Bay Shipping Company and the first Dorsets were brought over for Mr. Richard Scott of Milwaukee, OR, in 1860. The first Dorsets on the East Coast were brought from England in 1885 and exhibited at the American Fat Stock Show in Chicago. Other early importers between 1887 and 1891 were: William Daley, Lockport, NY; E.F. Bowditch, Framingham, MA; T.S. Cooper, Coopersburg, PA; J, L. Henderson & Son, Washington, PA and Tranquility Farms, Allamuchy, NJ.

Polled Dorsets originated at North Carolina State College, Raleigh, NC, and were apparently the result of a mutation which occurred in the purebred HOrned Dorset flock at the college. After careful research and testing were done to assure that the Polled Dorset carried the same characteristics as the Horned Dorsets and were able to propagate these traits, the new strain was accepted into U.S. registry in 1956.

Both horned and polled Dorsets are an all white sheep of medium size having good body length and muscle conformation to produce a desirable carcass. The fleece is very white, strong, close and free from dark fiber. Dorset fleeces average five to nine pounds (2.25-4 kg) in the ewes with a yield of between 50% and 70%. The staple length ranges from 2.5-4 inches (6-10 cm) with a numeric count of 46's-58's. The fiber diameter will range from 33.0-27.0 microns.

Dorset ewes weight from 150-200 pounds at maturity, some in show condition may very well exceed this weight, Dorset rams weigh from 225-275 pounds at maturity. Dorsets are one of the few breeds that carry the "our-of-season" breeding characteristic. The ewes are good mothers, good milkers and multiple births are not uncommon. Dorsets work well in commercial situations both in the ewe flock and from a terminal sire aspect.

The number of Polled Dorsets now in the country far exceeds the number of Horned Dorsets; however, this is not just the case in the USA; but is true also in other countries where Dorsets are popular. This is true simply because of the personal preference of the sheep producers.

Dorsets have growing in popularity to become the number-one white faced breed in the United States. Their numbers also make them the second largest breed in total numbers in the USA, ranking below only the Suffolk breed.

The official registry office for Dorset Sheep in the United States (both Horned and Polled) is called the Continental Dorset Club. The organization is governed by an elected Board of 6 Dorset Breeders from various parts of the country – giving all areas a representative on the Board. A National Show & Sale and Annual Meeting are held each year, and an International Dorset Show and a National Junior Dorset Show are held annually at the North American Livestock Exposition. Our organization has many activities involving our your as we believe they are the future of the sheep industry.

Dorset Sheep GalleryTake a closer look at the Dorset breed.