The Cotswold breed originated in 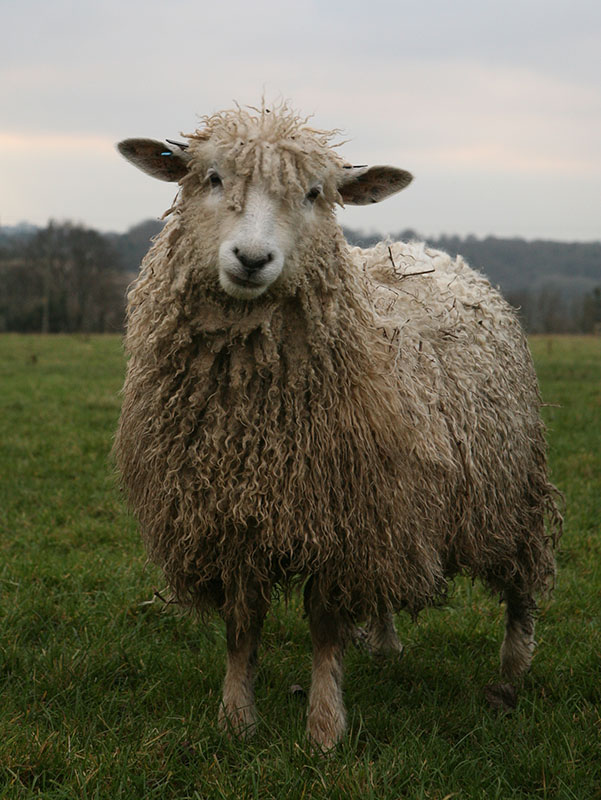 the Cotswold Hills of Gloucester, a south midland county of England touching the Bristol Channel. The Cotswold Hills cover an area of about 280,000 acres, have an average elevation of between 500 and 600 feet and are not particularly fertile. The soils do contain considerable lime, and the area raises fair crops of small grains and roots. Because of its mild, temperate climate, the area is well suited to sheep raising. The came "Cotswold" was given the breed because in the early days they were folded or housed in shelters known locally as "cots" or "cotes" and they were pastured on the wild, treeless hills of the area, called "wolds."

It is suggested that sheep were in the Cotswold HIlls at the time of Caesar's conquest of Britain, and sheep were mentioned in most of the early agricultural writings of the area. Professor David Low, in On the Domesticated Animals of the British Islands, suggested, however, that the Cotswold breed was not an outgrowth of the early sheep found in the hills, but that the Cotswolds of his day represented selections from the sheep that had been brought into the area from the lowlands. He based his opinion on the fact that the Cotswolds of the middle nineteenth century were a long-wooled breed of sheep, whereas the sheep that had formerly inhabited the hills were noted for their fine wool. It would thus appear that the Cotswold breed had inherited little more than a name from the original sheep that inhabited the area. Breeders of the Cotswold Hills started in about 1780 to introduce Leicester rams into the area to improve the carcass quality of the sheep. During the following fifty years much crossbreeding was practiced, which resulted in a reduction in The size and improvement in carcass quality. After 1825, Cotswold breeders started to select sheep for larger size, a part of which the breed had lost, and for heavier fleeces.

The Cotswold in the United States and Canada

The first Cotswold imported into the United States of which there is a record was brought over in 1832. Apparently the breed had been introduced earlier, because when Christopher Dunn of Albany, New York, made his importation, sheep of similar type were already quite common in this country. The breed has served about the same purpose as the other long-wooled breeds in the United States. It has been used for crossbreeding, as a means of increasing the size and feeding quality of lambs, and of getting increased staple length in ewe bands without losing fleece weight. Several large flocks of Cotswolds have been maintained in the western states for production of range rams. Some of these breeders have not kept all their sheep registered, as they have been chiefly interested in the production of rams for the range trade.

Characteristics of the Cotswold

To the casual observer, the external appearance of the Cotswold and Lincoln is similar, but there are several differences that are apparent. The Cotswolds are somewhat smaller than the Lincoln, although mature rams in good condition will weigh about 300 pounds and ewes usually around 200 pounds. Cotswolds carry more foretop than do Lincolns, and the fleece is carried in rather bold locks and is usually from eight to ten inches in length. The fleece grades braid but is somewhat finer and softer than that found on the average Lincoln. The fleece will mat or become cotted rather easily and unless it is kept clean and in good condition may become somewhat unsightly. The fleece parts along the back, is rather open and in hard cold rains does not offer a great deal of protection to the sheep. The average ewe flock will shear about twelve pounds annually, while rams should shear appreciably more wool. The fleece of the Cotswold is white.

The Cotswold has a white face and white legs, grayish-white color is not considered objectionable, and small black spots on the face or legs are not entirely unknown. They will also exhibit dark pigmentation on the skin of the nose, inside the ears and on the hooves.

The Cotswold has demonstrated its greatest usefulness in cross on flocks of ewes that lack in size, fleshing qualities, and in length of fleece. When commercial producers have mated the rams to small and short-fleeced ewes, they have been well pleased with the offspring. The Cotswold ranks between the Leicester and Lincoln in size, quality and fineness of fleece.

Cotswold Sheep GalleryTake a closer look at the Cotswold breed.