The Dorper is a South African 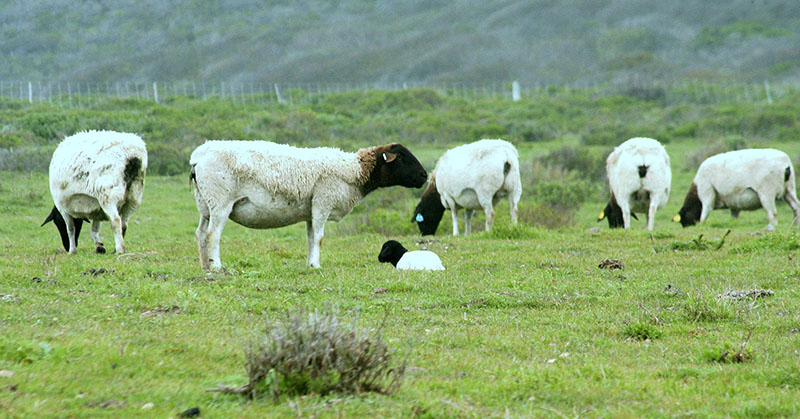 mutton breed developed in the 1930's from the Dorset Horn and Blackheaded Persian. The breed was developed for the arid extensive regions of South Africa. One of the most fertile of sheep breeds that is hornless with good body length and a short light covering of hair and wool. The breed has the characteristic black head (Dorper) as well as white heads (White Dorper). Furthermore the breed shows exceptional adaptability, hardiness, reproduction rates and growth (reaching 36 kg [~80 lbs] at three and a half to four months) as well as good mothering abilities.

The Dorper breed was developed through the crossing of the Blackhead Persian ewe with the Dorset Horn and this resulted in the birth of some white Dorper lambs. The difference in color is therefore merely a matter of preference for each breeder. Black-headed breeders constitute about 85% of the members of the Dorper Sheep Breeders' Society of South Africa.

The Dorper breed is now numerically the second largest breed in South Africa and has spread to many countries throughout the world.

The Dorper is primarily a mutton sheep and meets these requirements exceptionally well. The Dorper has a long breeding season which is not seasonally limited. A good manager can organize his program so that lambs can be dropped at any time of the year. The breed is fertile and the percentage of ewes that become pregnant in one mating season is relatively high. Lambing intervals can be eight months. COnsequently under good forage conditions and with good management the Dorper ewe can lamb three times in two years. A lambing percentage of 150% can be reached under good conditions while in exceptional cases even 180% can be attained. Under extensive conditions a lambing percentage of 100% can be expected. In a flock containing a large number of maiden ewes, the lambing percentage will be in the region of 120% as these ewes usually drop single lambs. If it is assumed that the lambing percentage is 150% and that management is at such a level that ewes can lamb about three times in two years, a Dorper ewe will produce 2.25 lambs on an annual basis.

The Dorper lamb grows rapidly and attains a high weaning weight which again is an economically important characteristic in the breeding of mutton sheep. A live weight of about 36 kg can be reached by the Dorper lamb at the age of 3-4 months. This ensures a high quality carcass of approximately 16 kg. This is associated with the inherent growth potential of the Dorper lamb and its ability to graze at an early age.

The Dorper is well adapted to a variety of climatic and grazing conditions. Originally this breed was developed for the more arid areas of the Republic but today they are widely spread throughout all the provinces. The Dorper does well in various range and feeding conditions and reacts very favorably under intensive feeding conditions.

The Dorper is hardy and can thrive under range conditions where other breeds can barely exist and the ewe can raise a lamb of reasonable quality under fairly severe conditions. As a strong and non-selective grazer the Dorper can advantageously be incorporated into a well planned range management system.

The Dorper is an easy care breed which requires a minimum of labor. Its skin covering which is a mixture of hair and wool, will drop off if not shorn to keep it tidy. The Dorper has a thick skin which is highly prized and protects the sheep under harsh climatic conditions.

The Dorper skin is the most sought after sheepskin in the world and is marketed under the name of Cape Glovers. The skin comprises a high percentage of the income (20%) of the total carcass value.

Dorper Sheep GalleryTake a closer look at the Dorper breed.