The Jacob sheep is indeed a unique 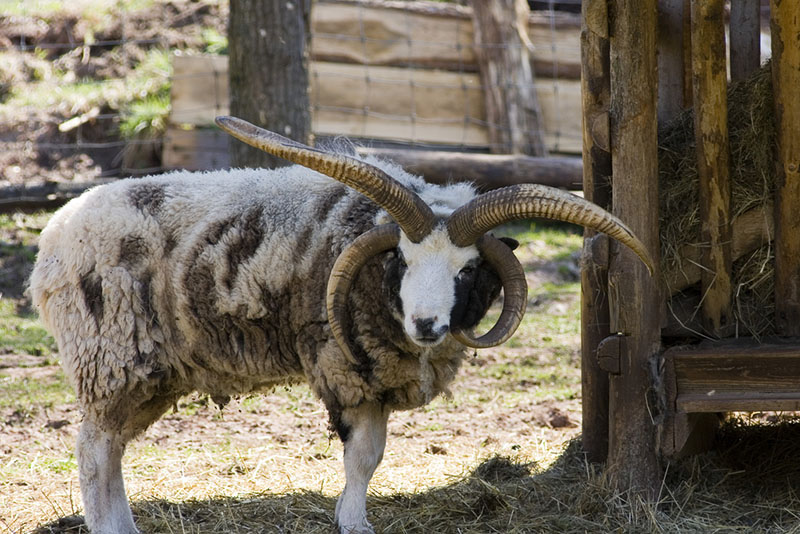 breed in America. Slight of build, with the narrow, lean carcass typical of some of the ancient British breeds, they are immediately noticeable due to their black and white fleeces and prominent horns. Both males and females are horned, sporting two, four and occasionally six horns. Most striking to many people are four-horned rams with two vertical center horns as much as two feet long, and two side horns curling down along the side of the head. Two-horned rams develop the more familiar classic double curl. Horns on the ewe are always shorter and more delicate than the rams' horns.

The Jacob fleece, which is properly described as white with black spots, is prized by hand spinners and weavers. The white and the black wool, which may fade at the tips to dark brown, may be blended to various shades of grays. The wool is of medium grade, and interestingly, the black wool, which grows out of black skin, frequently is shorter than the white wool, which grows from white skin. Ideally, the animal should be 40% black and 60% white, with certain characteristic patterns. The legs should be predominantly white, with black hooves and black knees and hocks desirable. The desired Jacob face is frequently referred to as "badger faced', with black cheeks and muzzle, but a white blaze down the front of the face. The nose should be black as well as the horns and ears.

The Jacob is an old, unimproved breed. As a result, it is slight in build, with ewes averaging only about 100-120 pounds. Typical fleeces will weigh only three or four pounds, and may vary quite a bit in coloring, crimp, and fineness. Jacob breeders take great delight in the personalities of their animals; some believe that the lack of breeding improvement is responsible for preserving a more goat-like curiosity and agility. They bear one or two lambs in the spring only, and lambing is typically very easy for these sheep. Horn growth begins immediately and the ram lambs will be born with horn buds already poking through the wool.

The origins of the Jacob breed are obscure, to say the least. There are almost as many stories about where they came from as there are story tellers. They are a British breed, and all the animals in the United States have been brought here in just a few importations in the past several decades. Prior to the twentieth century they were referred to as Piebald sheep; the name Jacob comes from the Old Testament story of the dealings between Jacob and his father-in-law Laban. This Biblical story of Jacob's striving to achieve spotted sheep and goats is thought to be the earliest record of selective breeding. Until recent times, Jacobs were kept only at a few large estates in England. In spite of some of the more fanciful tales, it appears that their black and white coloring may have originated with Moorish sheep brought from Spain or Africa and their four-horned characteristics from Norse sheep from Scandinavia and the northern Scottish islands. Certainly there are sheep in North Africa with black and white fleeces like the Jacob, and there are other British breeds with four horns, particularly in the northern and coastal regions.

We will be happy to list national Breed Associations and Registries in addition to the ones listed. Please use the comment form below to submit additional registries.

Jacob Sheep GalleryTake a closer look at the Jacob breed.