The Scottish Blackface is an 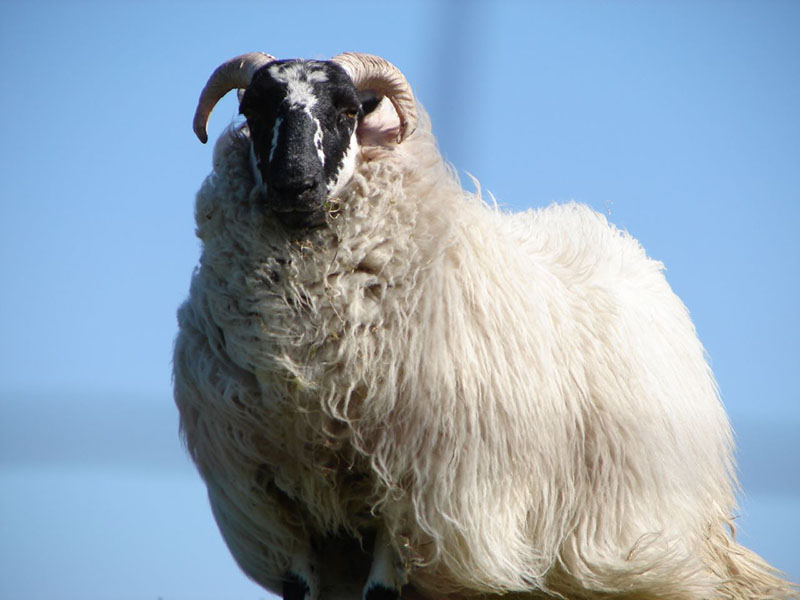 attractive, hardy, old breed whose origins are lost to us. It is likely that the breed developed in the border area of Scotland and England.

Monastery records show that monks in the Twelfth Century raised sheep that are the progenitors of the modern Scottish Blackface breed. The monks used the wool of the dun-faced sheep, as they were often called, for their own clothing and exported large amounts to Europe. Later records show, in 1503, James the IV of Scotland established a flock of 5,000 Scottish Blackface in Ettrick Forest.

Today the Blackface is numerically, and probably economically, one of the most important in the United Kingdom. In 1989 their wool accounted for nearly 40% of the total wool production of Scotland and one twelfth the wool production of the United Kingdom. The fleece that the Scottish Blackface has today is the result of selective breeding since medieval times from a short coarse wooled ancestor. The fleece of the modern Scottish Blackface weighs from 1.75-3 kg with a staple length of 15-30 cm.

Blackface ewes are excellent mothers and will defend their offspring against any perceived threat. They are good milkers and are able to yield a lamb crop and a wool clip even when on marginal pastures. The breed spread from the border areas during the 19th Century to the highlands and the islands and also to Northern Ireland and the US. There are small flocks scattered across the USA but this robust little breed has remained a minor breed.

The Scottish Blackface are excellent on brushy hillsides and can be useful for improving pastures. They are very adept at regaining condition after lambing or a hard winter. In the world of meat production the Blackface plays two distinct roles in the UK. Firstly they produce lambs on the hills; latter they are brought down to the lower country and are crossed with Border Leicesters.

Blackface lambs yield a carcass ideal for the modern consumer. The meat is free of superfluous fat and waste and is known the world over for its distinct flavor. Although they are not large sheep they have enormous potential for the production in the US of high quality lean lamb for today's health conscious consumer.

Overseas Scottish Blackface wool is used in the production of fine carpets. It has exceptionally hardwearing qualities combined with a natural springiness which enables it the pile of the carpet to resist tread marks and to regain its upright position even after the prolonged pressure of heavy furniture. Many of the best Axminster and Wilton Carpets are made from this wool. Some grades of Scottish Blackface wool are used in the manufacture of Scottish and Irish tweeds. Other grades are exported in considerable quantities to Italy where the wool is greatly prized for filling mattresses. Artisans have long treasured the horns of the Blackface for the carving of shepherds crooks and walking sticks. In the US the fleeces are becoming of interest to fiber artists and hand spinners for use in tapestry and the making of rugs and saddle blankets.

The Scottish Blackface is found in the Highlands and Borders of Scotland, Pennines, Dartmoor and Northern Ireland. They have also been exported to the United States, Italy and Argentina.